HP Enterprise: You with the horn, be silent, we are composing infrastructure

Synergy - firm's answer to hybrid IT ships next April, hopefully not on Fool's Day 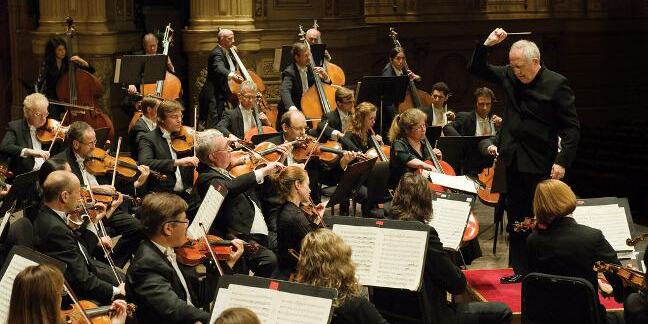 HPE Discover Hewlett Packard Enterprise (HPE) has come up with a nifty way for customers to build internal clouds - assuming that those punters don’t want to use a public version of the fluffy white stuff from Amazon Web Services (AWS).

Synergy, which HPE’s well oiled marketing engine assures us is an industry first, includes big ‘frames’ that lets the IT department insert rack scale blobs of compute, storage and fabric into an infrastructure, managed by software.

The company reckons the hybrid “platform” bridges the gap between the old and new worlds, as enterprises look to improve management of the existing server barn and test, develop and throw new apps in the cloud.

These are two very different ways of running a tech estate but though organisations face this bimodal challenge they don’t have the budgets for two operating models, or two different types of infrastructure.

“We are bringing an infrastructure to our customers that lets them deal with this dual challenge,” said Neil MacDonald, veep and GM of BladeSystem for the converged data centre infrastructure unit.

“On the one hand [there are] traditional IT needs, packaged apps, ERP, virtualisation farms, and on the other hand, applications developed for a hybrid cloud world or cloud native and containerised apps, and you can do this on a single infrastructure,” he added.

HPE thinks its ‘composable infrastructure' approach - pulling out components from a “fluid resource pool”, and replacing them with different ones as required by an app, without having to re-wire the entire system - hasn’t been done before, at least by an old world vendor.

AWS might just offer a similar service, the firm admitted.

Only 15 per cent of customers put applications in a public cloud, HPE pointed out. “You’ve got challenges from a a data governance perspective, a regulatory perspective in a lot of industries means you can’t go that way

“The challenge that we have,” MacDonald added, “is dealing with that kind of flexibility and agility inside the data centre without having the delays in deployment and costs of management and servicing the infrastructure that comes from traditional IT ops.”

On top of Synergy’s compute, storage and networking fabric managed by HPE’s OneView interface, the system includes software defined “intelligence” and a unified API covering among others Microsoft, VMware, Chef and PuppetLabs. A single line of codes abstracts every element of the infrastructure, and the infrastructure is entirely programmable, HPE said.

Over-provisioning and stranded resources are common in a typical IT environment. The Natural Resources Defense Council reckoned the average server over-provisioning rate ranges from 82 to 88 per cent.

Synergy boots up infrastructure that is ready to run physical, virtual containerised app, and based on its own experiences of internal deployment, can cut over-provisioning by 60 per cent and give cap-ex saving of up to 17 per cent, the company told us.

MacDonald said automation in an enterprise infrastructure is “more challenging than people think” - the different tools including firmware, drivers and BIOS setting required in aspects of the lifecycle and settings and states that are managed to configure, deploy and update an infrastructure.

“As people tried to automate that and build and maintain that automation, they have found that integrating these APIs can be 50 plus hours of work and they are very fragile, they change over time”

In-house automation generates large numbers of scripts, thousands of lines of codes and often “you find that maintaining that takes as much work as doing the job manually in the first place”, the HPEr said.

Synergy turns the fabrics into a “programmable set of resources” that can be “composed with as little as a single line of code”, pulling down the time to minutes rather than a little over two days. Macdonald said:

“There is a unified API, it’s friendly to DevOps consumption models and can be easily leveraged by programmers, it enables you to treat bare metal as a simple cloud of resources just like you would a virtualised cloud.”

HPE created the converged infrastructure and claims to have developed a new category in computing here. But channel partners we’ve spoken to reckon Synergy will have little impact outside of the large enterprises.

“I think many of our smaller customers would not need to change enough stuff to make it that relevant - and would not need any bare metal servers so virtualisation would suffice,” one HP channel loyalist said.

“However for larger players, it could be killer - especially if they combine it with flexible financing initiatives,” he added.

Synergy starts shipping next April and pricing won’t be available until nearer that time. El Reg wonders if AWS will be watching this space with anticipation. Possibly, though it probably wouldn't admit it. ®