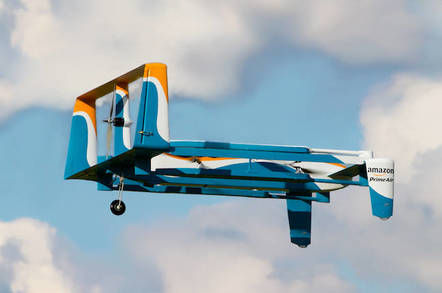 Amazon.com has shown off its latest delivery drone designs.

This time around the drone (picture above or here for readers on mobile devices) has two means of propulsion. One is a set of propellers on its sides that lifts the craft vertically. Once the drone reaches an altitude of “almost 400 feet”, a rear-mounted propeller joins the fun to deliver forward motion.

The drone seems to know roughly where to go, then homes in on a mat bearing Amazon's “a” glyph when it tried to land. Details of the mat haven't been provided. A figure for range is mentioned – the claim is up to “10 miles (16 km) or more” – but Amazon hasn't explained if that's a round-trip or one-way range.

Those questions are glossed over in the video below, which features Top Gear's Jeremy Clarkson. In case you've avoided clickbait for a year, Clarkson's now signed to Amazon to head a new show that will be just like Top Gear but also so unlike it the BBC couldn't possibly get even a single lawyer interested in writing a letter about it.

Amazon does say it will start using delivery drones “when and where we have the regulatory support needed to safely realize our vision.” That “when and where” seems just over the horizon as Amazon adds that it hopes “one day … to deliver packages to customers around the world in 30 minutes or less.”

It's worth considering that 30 minute delivery claim, because the video depicts an item with only moderate turnover – child-sized football boots – being found in a warehouse and duly dispatched to meet a mid-season crisis.

If Amazon is going to achieve 30-minute delivery for items of that ilk, it will need a lot of rather large warehouses in many, many places, just to keep stuff within 16 km of everyone.

The video also shows the drone requires lots of open space in which to land. Which will be problematic in parts of cities dominated by apartments/flats.

All of which leaves lots of questions to be answered. Or you could just luxuriate in a few minutes of new Clarkson. ®