Once again fails to suck Earth into black hole 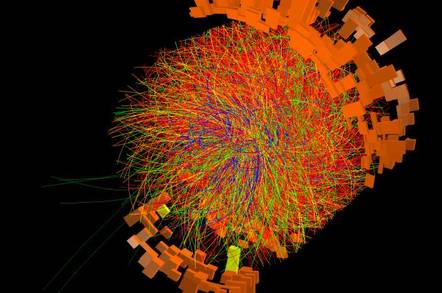 With the Large Hadron Collider's (LHC's) refit and restart accomplished, the records just keep tumbling. CERN has announced the highest-energy ion collision ever.

The data generated by the experiment is going to take time and supercomputers to analyse, but CERN says the two lead ions slammed into each other at more than 1 Peta-electron-volt (PeV).

That number has to be treated with care: the accelerator physicist in charge of the heavy ion program, John Jowett, writes that because while the lead isotope accelerated in the LHC contains the electric charges of 82 protons, it also contains 126 neutrons which have no charge, meaning the energy is shared among 208 nucleons (the electrons are stripped off to create an ion).

“In the nuclear-physics literature, it is customary to quote the average centre-of-mass energy of pairs of colliding nucleons, which is now 5.02 TeV,” Jowett writes. “Still, the concentration of so much energy into the tiny nuclear volume is enough to establish truly colossal densities and temperatures about a quarter of a million times those at the core of the sun.”

CERN's announcement explains that the heavy ion collisions – in this case, lead atoms with their electrons stripped off – allow boffins to “study a state of matter that existed shortly after the big bang, reaching a temperature of several trillion degrees”.

At that temperature, matter becomes a strange thing called a quark-gluon plasma, not seen in nature since the universe's age was measured in microseconds.

The “old” LHC could also produce quark-gluon plasma, but with the higher energy, collisions will yield greater volumes of the stuff, giving the boffins a better chance to characterise it.

Once the universe cooled sufficiently – a couple more microseconds after the Big Bang – the gluons are able to bind quarks together into protons and neutrons, and the universe condensed into the bulk matter we see today. ®