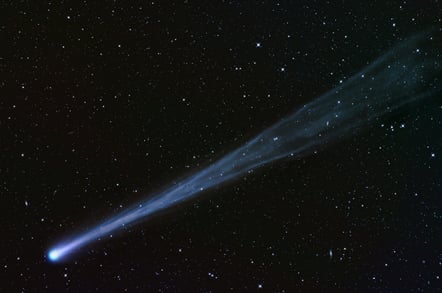 KIC 8462852 is a star in the Cygnus constellation about 1500 light years from here. Were it not for the fact that Kepler Space Telescope photos reveal fluctuates in brightness to a degree we've not previously seen in the cosmos, nobody would care.

That fluctuation is, however, so odd that scientists recently floated in a scholarly paper the idea that star's oddities are “consistent with a 'swarm' of megastructures” constructed by sentient beings." The paper therefore suggested KIC 8462852 is “an outstanding SETI [search for extraterrestrial intelligence] target.”

The notion that aliens have made something big enough to block our view of a star captured plenty of interest, leading to lots of publicity for the paper's theory.

As it happens, others have already theorised about the star and its odd behaviour. This paper, for example, says KIC 8462852 probably has lots of comets, or comet fragments, in its orbit.

Astrophysical Journal Letters, NASA says, will soon publish the results of that new study that suggests whatever is dimming our view of KIC 8462852 is cold. Spitzer could not find “any significant excess of infrared light from warm dust”, which means “theories of rocky smashups [are] very unlikely, and favors the idea that cold comets are responsible.”

As KIC 8462852 has been seen dimming at regular intervals, it's now supposed that the star owns a swarm of comets, some of sufficient size to obscure our view. The theory expands to suggest the swarm is the result of an ancient cosmic collision that left the star with one very large fragment of comet, and a fleet of trailing fragments that together obscure the star in what looks like odd patterns to us way over here in our corner of the galaxy.

And the alien megastructures? Well no-one's disproved that theory … ®