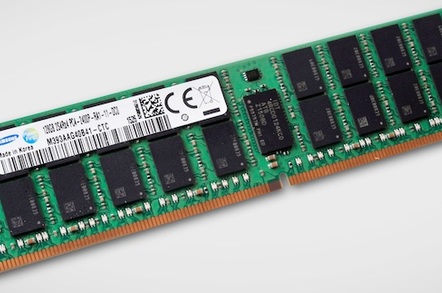 You read that right – a single registered dual inline memory module packing 36 individual 4GB chunks of 3D TSV DDR4 DRAM, for a total of 128GB, can now be yours.

The Register is aware of servers with 96 DIMM slots, which means … WOAH! … 12.2 terabytes of RAM in a single server if you buy Samsung's new babies.

Samsung says these new DIMMS are special because “the chip dies are ground down to a few dozen micrometers, pierced with hundreds of fine holes and vertically connected by electrodes passing through the holes, allowing for a significant boost in signal transmission.”

There's also “a special design through which the master chip of each 4GB package embeds the data buffer function to optimise module performance and power consumption.”

We'll take you at your word there, Sammie, and also note your claim of 2,400 megabits per second speed for the memory.

The Korean company's also promising “a complete lineup of its new high-performance TSV DRAM modules within the next several weeks including 128GB load reduced DIMMs.” It's also pledging “e modules with data transfer speeds of up to 2,667Mbps and 3,200Mbps that help to meet intensifying enterprise server needs, while expanding TSV applications into high bandwidth memory (HBM) and consumer products.”

Hype and roadmappery aside, the greatly increased RAM density 128GB DIMMS will bring will be extremely useful to many users. Yes, these DIMMs will be expensive to start with and not all servers will be happy to work with that much RAM. Yes, plenty of folk stick with 32GB DIMMS today because 64GB DIMMS are expensive. And yes, this level of memory density can't be un-invented now so many uses for it will doubtless be dreamt up before long. ®

This is about more than ARM, it is about making hardware malleable