Samsung Gear VR is good. So good 2016 could be year virtual reality finally makes it

But can anyone make VR content? Ask whoever runs your local film school ... 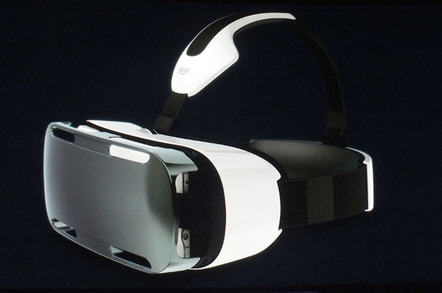 Having already lived through one virtual reality hype cycle, I’m surprised to find that 2015 has been punctuated of a number of experiences proving that virtual reality may finally be nearing the mainstream. In February, I experienced some of the new head-mounted displays - and found first-generation Oculus Rift unimpressive. Quick on the heels of that, I got a taste of some "immersive video", footage gathered by an expensive, fancy camera that capture a full sphere around the device.

Watching an LA Lakers game from centre court seats, I realised virtual reality (VR) had a shot at being really big. The future of sports broadcasting will favour a mixture of ultra-high-definition broadcasting (Tokyo plans 8K resolution for their 2020 Olympics) and live, streaming immersion - provided our data networks can handle the traffic.

I watched carefully as Oculus, Samsung, Sony and Valve each made their respective hardware announcements over the last few months, drawing a line under 2016 as the Year of VR Hardware.

First to market of all of these - because it’s by far the simplest - Samsung’s Gear VR launches this week around the world. Last week, from the comfort of a high-end carrier’s storefront on Istanbul’s main shopping drag, I donned the Gear VR to have a look around.

In a quarter of century of work on VR systems - from those I hacked together myself, all the way to supercomputer-based products that cost millions of dollars - I had never had such a fluid VR experience.

The essence of VR relies on a close coordination between the orientation of the head and what gets rendered to the screen. Sensors read the orientation, feeding that into the relevant software, which quickly updates the display. Get this wrong, and people quickly become motion sick. We’re not accustomed to any desynchronisation between our head movements and the view from our eyes - it’s a signal that we’ve eaten something that’s poisoning us, and vomiting your guts up offers a cure.

How much desynchronisation people can tolerate varies from person to person. Anecdotes suggest women are more sensitive to this ‘simulator sickness’ than men, but almost everyone will begin to feel sick if the delay between head motion and display changes runs to more than a tenth of a second.

That’s going to be the big barrier for Google’s Cardboard, a wonderfully accessible bit of kit which converts your average smartphone into a full head-mounted display. Smartphones can track the position of your head, but do it slowly, and not particularly accurately. There’s never been a need for a smartphone to provide either the speed or the accuracy that might prevent people from losing their lunch.

The Gear VR has those high-speed high-accuracy sensors built into the unit - sending something like 1000 updates per second to the software. That close coupling between sensor and software created a smoothness and comfort in the immersive experience that made it feel more like putting on a comfortable old shoe than strapping on a heavy, clumsy spacesuit. Everywhere I looked in that virtual world - and I looked everywhere, making quite a spectacle of myself amidst the Turks having a Saturday visit to the shops - the display followed immediately, seamlessly, and effortlessly.

Considering Gear VR is quite likely to be the least capable of all of the forthcoming VR systems, it’s reasonable to predict 2016 will be very much like 1947 - the year television broadcasting was introduced across the United States. Those first sets were huge boxes with tiny displays and were a very significant purchase for most households. Still, televisions sold in the millions, and within a decade half of all American homes owned one.

That’s about to happen again, and likely just as quickly. By 2025 well over a hundred million homes in the US - and probably another two hundred million worldwide - will be equipped with consumer VR systems. They’ll be used in concert with all of the other screens that have proliferated through our world (television, laptop, tablet, smartphone, wearable) to provide an immersive experience, when people have the time, inclination or need for immersion.

Yet hardware is not enough. Once people don their head-mounts, what do they see? What are they doing? At present there are only a handful of individuals anywhere in the world who have any experience creating immersive content, and almost all of that content has been one-off projects, experiments in the emerging medium.

We need to be able to have an army of trained professionals - as we do in film and television and video gaming - ready to work in the production facilities of the 21st century, churning out a growing supply of content for these new devices. We don’t know how to write for immersion, or direct, or light, or use the camera, or edit, or record sound, etc. All of the skills they teach at any decent film school will need to be rediscovered, reinvented, and adapted to the new medium of immersion.

That’s not going to happen overnight. But that training ought to to start today, because demand for immersive content is going to skyrocket. A year from now we’ll likely be in a world where demand has greatly exceeded supply. That’s an opportunity - but it’s also a danger, because if people can’t find enough novelty in the immersive world, they’ll walk away from it, and the technology will once again fail to live up to the hype. ®