How many coincidences does it take to be Scroogled? 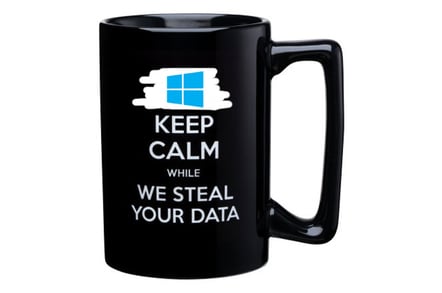 “Anonymity is like virginity. You don't get it back once you've lost it,” writes one Register reader on Microsoft’s latest raid on your privacy.

Microsoft pulled a major update for Windows after it blew away the user's privacy settings, allowing app developers and advertisers to glean the user’s identity.

But that’s only part of the story, which gets murkier by the day.

Two bugs would be a puzzling coincidence – but something else makes it altogether more troubling.

This year Microsoft introduced background tracking services called DiagTrack, or the Diagnostics Tracking Service. It was added to Windows 8.1 installations as well as betas of Windows 10. It arrived without much fanfare in May 14, in the shape of a patch, KB3022345.

It was just one of several slurping enhancements added via the back door.

The data that DiagTrack collected was typical of a spyware programme. The only way you knew you were being monitored was by eyeballing the list of running processes in Task Manager. As Microsoft explained:

Users thought it had disappeared in recent Windows 10 builds – but it hadn’t. Microsoft had simply renamed it.

The sinister-sounding tracking app was now the beatific and caring “Connected User Experiences and Telemetry Service”. Once again, it needs to be disabled manually (this time through the Services control panel).

“It is this kind of overriding desire for control and a disregard for user choices which is harming Windows 10,” says Forbes journo Gordon Kelly, and he’s right.

Microsoft spent millions portraying Google as a greedy and amoral data marauder. Redmond doesn't need to read your email, it told everyone. The Scroogled campaign positioned Microsoft itself as the ethical alternative; the occupier of the moral high ground.

For a while, it was. But Windows 10 is bad for your privacy, and it is damaging Microsoft’s reputation as a trusted consumer brand.

The face of Windows, Joe Belfiore, is now on a world cruise, taking a 12 month break. Who can blame him? Nobody seems to be in charge. ®