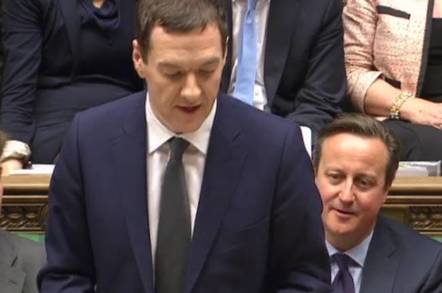 Autumn Statement Chancellor of the Exchequer George Osborne failed to mention IR35 even once during his Autumn Statement to MPs on Wednesday at lunchtime – despite the government recently floating new rules to crackdown on freelancers' tax arrangements.

In the small print of Osbo's statement – which in classic style was published after the thin-lipped minister delivered his speech to the Palace of Westminster – we were told that:

Following consultation, relief will be restricted for individuals working through personal service companies where the intermediaries legislation applies. This change will take effect from 6 April 2016.

The Register has sought more details on what this means for freelance folk in Blighty from both the Treasury and the HMRC. We'll update this story if we hear back from the government departments.

Elsewhere in today's statement, which included the government's spending review, little mention was made of broadband access in the UK, even though the chancellor trumpeted investment in infrastructure during his speech.

Again, turning to the small print, Whitehall has plans to "explore" slinging an unspecified amount of cash at altnets, by creating a funding bucket that would apparently give those network developers better access to finance.

"The fund would be supported by both public and private investors, and would be managed by the private sector on a commercial basis," the Treasury said.

Entirely missing from the document, however, is any mention of the government's promise to bring in a legally binding broadband service obligation by 2020, as pledged by PM David Cameron earlier this month.

Today's headline from Osbo's Autumn Statement will be the government's U-turn on cuts to tax credits. But here, in the pages of El Reg, we all need to marvel at this jaw-dropping announcement. ®

The Treasury and HMRC declined to comment on this story. IT contractors and other freelance peeps aren't out of the woods yet, however. The Reg understands that Whitehall is continuing to eyeball plans for IR35.