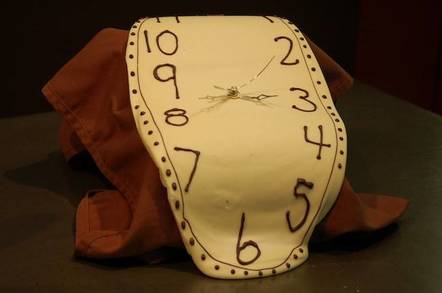 The International Telecommunications Union's (ITU's) debate on the future of leap seconds has decided a decision on the matter can wait for 252,288,000 seconds.

The ITU's World Radiocommunication Conferences kicked off back on November 2nd and leap seconds were one item on the agenda because of international worries that the intercalated slivers of time introduce “specialised ad-hoc time systems” that are hard to handle. The leap second of 2012 certainly proved tricky, after upsetting some Linux systems. 2015's leap second, however, went off without a hitch, leading some to suggest that the extra moments just aren't a major hassle any more.

The Radiocommunication Conferences decided that humanity needs to spend more time pondering the problem, so has kicked it into the long grass by deciding that a paper will be presented at the 2023 edition of the event. Or about 252,288,000 seconds from the time of writing if the conference takes place in late November .

Until then, the current Recommendation TF.460-6 (02/02) applies, which on The Register's reading means leap seconds are still live.

If the ITU, the International Bureau of Weights and Measures (BIPM) and the other bodies who run time decide we can do without leap seconds, the slowing rotation of the earth means that readers' descendants may end up out of synch with reality, an ugly state of affairs indeed. ®