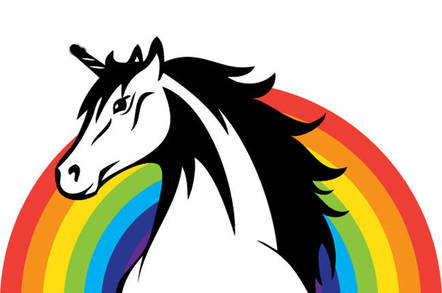 Analysis Silicon Valley is going to see just how much of its own hype has transferred to Wall Street Thursday with a rare IPO of one of its "unicorns" – companies that venture capitalists have valued at over $1 billion.

The credit card reader company Square – which has yet to turn a profit – will be selling a portion of its shares at a price that values the entire company at $2.91 billion: a significant drop from even just this month.

In its last round of private funding, Square had been valued at $6bn; when the company announced it would go the increasingly rare route of making a public offering earlier this month, it slashed its value by a third to $4.2bn (with a share price of between $11 and $13).

But its actual IPO starting share price wasn't released until the evening before. Finally, the details emerged: a $9 share price with 323 million shares offered – putting the company's worth at $2.91bn.

Why does this matter? Because while Silicon Valley VCs continue to persuade themselves that they aren't in a tech bubble, the rest of the world isn't so sure. Very few of the large tech firms have gone public, in large part because of rules introduced by the SEC that have made rampant speculation and quick profit-making through hype far more difficult.

While seemingly every week there are billion-dollar buyouts and valuations of companies that have yet to make a single dime in profit, the truth is that those valuations happen within the Silicon Valley bubble itself. What's more, high valuations only aid the people funding the companies.

Thanks to the terms of the deals that VCs make companies sign in order to get additional funding, so as long as the net worth of the entire company is worth more than their investment, anything beyond that is pure profit. In other words, VCs have learned from the last tech boom-and-bust and they continue to invest and hype companies to an unreasonable degree – just without assuming the same personal financial risks.

By going for its IPO in the middle of frenzied speculation about whether the tech bubble is fit to burst, Square has become a temporary talisman for the tech sector. Many expect – and are willing – the IPO to fail. Which is why the company was forced to become more realistic with its valuation. But at the same time, everyone in Silicon Valley is praying that the IPO goes well and keeps the party going.

What can we expect?

There is always a frenzy of action and commentary around IPOs, but the truth is that little of real lasting value will emerge for a few days. The share price will either jump and fall or fall and jump, it doesn't make much difference.

All the highly paid financial advisors that Square has to guide the IPO will have used their bag of Wall Street tricks to get an initial boost to the price so they can claim victory. So if the share price falls, you can expect them to be blamed for poor management. If the share price goes up, expect Square and tech VCs to appear triumphant, lauding how great they and tech are.

But the truth will emerge after a few days, and then the real picture will take until Square has to start releasing its financial results. And then of course, the next round of funding for all the "unicorns" will prove interesting viewing. Our expectation is that, faced with real-world evaluation, it is inevitable that valuations will fall. There is simply no way the tech companies are worth the amount that the Valley is putting on them.

Once Square's IPO is over, another IPO is in the wings: the parent company of Tinder is planning to go public on Friday. That launch is likely to be less fraught, since the company products – just about every online dating app and service on the market – are much more traditional and bring in real money every month.

Nonetheless it will be interesting to see how Square's launch impacts anything else placed in the tech sector. And the results of both will likely decide whether more tech companies decide to enter the wider world or stay in the safe confines of Silicon Valley. ®