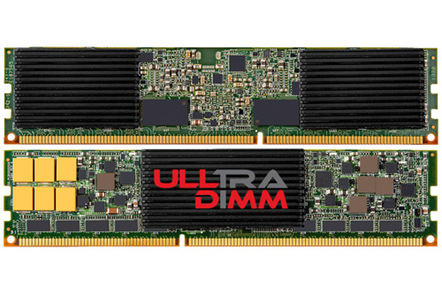 The basic concept is to put flash chips on DDR3 and 4 memory DIMMS, thus giving the flash memory channel access, which has lower latency than PCIe flash cards. Netlist and Diablo Technologies worked together on this and then separated, Diablo licensing the resulting Memory Channel Storage to SMART Storage.

SMART then produced ULLtraDIMM product using this tech, and Huawei, Lenovo (IBM servers originally) and Supermicro took it on in OEM deals. SanDisk bought that piece of SMART and inherited the Diablo licensing deal. Western Digital is now buying SanDisk.

NetList alleged Diablo misappropriated its IP and sued it, with Diablo countersuing, and the two entering costly and ongoing IP litigation hell.

Step forward Sammy in white knight guise, with a gift of $8m cash from Samsung Electronics and a $15m investment in Netlist from Samsung Venture Investment Corporation. That $23m will come in very handy indeed. Netlist and Samsung intend to sample NVDIMM product to select customers in 2016.

This product will use Samsung DRAM and NAND, and Netlist’s HyperVault technology.

Netlist CEO and president C.K. Hong talked of this being a transformational partnership with Samsung.

By having such technology, Samsung will have a base on which to mount potential ReRAM chips and have a competitor to Intel and Micron’s 3D XPoint memory, along with the HP-SanDisk-ReRAM initiative. ®