Smartwatch should be able to use 90 per cent of wireless chargers, but… 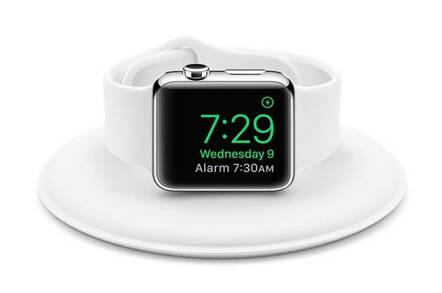 Apple is now selling a wireless charging pad for its smartwatch. The $79 plate not only demonstrates Cupertino's commitment to design, it also confirms its habit of ripping off people.

The magnetic charging dock is a small circular pad that the Watch can be placed on to recharge. It will only work with Apple's smartwatch, though. This is odd because Apple's Watch and charging pad use the Wireless Power Consortium's Qi (pronounced chee) technology that is used by 90 per cent of the wireless charging products on the market.

Qi is an open standard used in hundreds of certified products. People should be able to mix and match cheap Qi chargers with Qi-compatible gadgets – but not Apple Watches.

The iGiant has deliberately tweaked its technology so that only the £50 charging pad and Watch will work together, forcing Watch owners to use Apple's power plate.

"The Apple Watch charger that comes with the device is Qi based, but the firm decided not to submit it for interoperability testing," John Perzow, VP of market development at the consortium, told The Register. "I think they are using version 1.1.2 of Qi, but the software stack has been altered so that only Apple's charger works with Watch."

There's an ongoing standards war in the wireless power market, with two competing groups – the Wireless Power Consortium versus the Airfuel Alliance, which formed following the merger of the Alliance for Wireless Power (A4WP) and the Power Matters Alliance (PMA).

So far there are about 15 million devices using the wireless chargers developed by the Airfuel Alliance partners, compared to about 150 million pieces of hardware using the Qi standard (excluding Apple's Watch). Some companies, like Samsung, have built hardware that embraces both standards, but that's an extra cost that most companies don’t want to bother with.

So it's logical that Apple would go for Qi technology – it's relatively cheap, it's an open standard, and it works well. It's also logical – from Apple's perspective – that they bork the Qi system to ensure that all that lovely peripheral money continues to flow into Cupertino's coffers.

The only people who lose on the deal are ordinary folks. There are wireless power points springing up all over the place, including in cars, hotels, cafes and airports. Many homes have a wireless power system installed for at least one device, usually phones.

It would be more convenient if Apple just followed the standard and allowed them all to be used. It's not like Apple invented the technology and is protecting intellectual property, this is a straight forward money grab by selling a $79 device that probably cost the company less than $10 to make. Qi wireless chargers cost between $9.99 and $30, typically.

Apple hasn't responded to inquiries on the matter at time of going to publication. ®