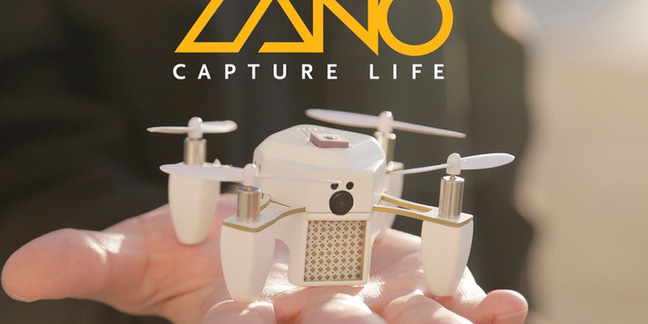 The company behind the troubled ZANO nano-drone project has pulled the plug, leaving thousands of Kickstarter backers in the lurch.

The UK's Torquing Group Ltd tin-rattled its way to a record £2,335,119 from 12,075 people for the "world's most sophisticated nano drone - aerial photo and HD video capture platform".

Although the drone did make it into production, and some people received the promised kit, it simply didn't work as promised, as the BBC reported earlier this month.

"Having explored all options known to us, and after seeking professional advice, we have made the difficult decision to pursue a creditors' voluntary liquidation.

"We are greatly disappointed with the outcome of the Zano project, and we would like to take this opportunity to thank everyone who has supported us during this difficult period, especially our loyal employees, whose commitment has exceeded all expectations."

Backers will be contacted by an insolvency practitioner, the message explained.

One of those left ZANO-less, who pledged £164 back in November 2014, told the BBC: "Even up until a few weeks ago, we were getting emails saying the first 7,000 Zanos were nearly ready to be dispatched

"It's unfortunate to see Europe's most successful Kickstarter campaign implode quite so spectacularly, particularly so close to them finally shipping."

Unsurprisingly, the mood down at Kickstarter is decidedly ugly. ®