Anons are our customers, and we don't censor them either, says Prince 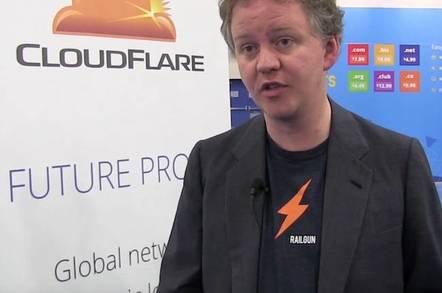 Matthew Prince, CloudFlare's cofounder and CEO, has hit back at Anonymous, which claimed his firm backs ISIS by keeping terror websites up and running.

CloudFlare is a content-distribution network: it acts like a huge sponge, soaking up deluges of internet traffic that would otherwise overwhelm small to medium-sized websites, and dishes out pages and web stuff to visitors.

Prince told us hosting any content on his network is not an endorsement – there are millions of pages cached in his company's servers. And he said it was a bit rich for Anonymous to be pressuring CloudFlare to drop websites.

"I did see a Twitter handle said that they were mad at us," Prince told The Register on Tuesday. "I'd suggest this was armchair analysis by kids – it's hard to take seriously. Anonymous uses us for some of its sites, despite pressure from some quarters for us to take Anonymous sites offline."

If the cops or Feds come to San Francisco-based CloudFlare about one of its customers, and they have all the proper legal documentation to take down a site, then the Silicon Valley upstart is happy to cooperate, Prince said.

But more often than not, investigators want him to keep sites up rather than take them down. Read into that what you will.

"Even if we were hosting sites for ISIS, it wouldn't be of any use to us," he continued. "I should imagine those kinds of people pay with stolen credit cards and so that's a negative for us."

With more than four million customers, it's inevitable that some clients may be dodgy, he said. On whether a website should be allowed onto his cloud platform, he said he'd rather take advice from the police or the US State Department (which is also a customer) than from some faceless Twitter user.

It's not in CloudFlare's philosophy to just take down sites because management doesn't agree with the content, Prince said. Some hosting companies exercise tight control about what can be served, but his firm doesn't want that kind of power.

He cited a personal case from a few years back, after a hacker used stolen information about Prince to access his tax files and posted the details on a CloudFlare-hosted site. Prince says he didn't take the site down, although the US authorities did shortly afterwards since the hacker had also posted personal data from Michelle Obama and the head of the FBI.

Prince said that he recognized that tempers were high in the wake of Friday's Paris atrocity, but explained that we'd been here before and it's important that Europeans learn from America's mistakes.

"My European friends were very quick to criticize the US post-9/11 because of the Patriot Act," he explained. "There were plenty of people who said that you can't trust any US tech firm because of it. I have a feeling now that Europe will have its own reactionary reaction, and then EU companies won't be trusted." ®

Full disclosure: The Register is a CloudFlare customer.