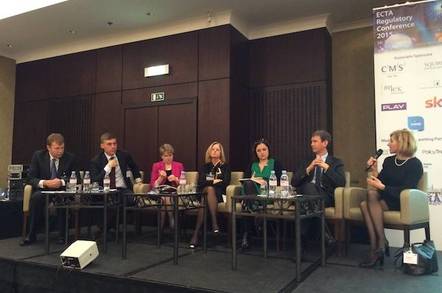 ECTA Regulatory Conf '15 TalkTalk boss Dido Harding has described the departure of BT Openreach’s chief Joe Garner as a big headache for the former state monopoly – which is in the midst of battling to retain the infrastructure wing of its business.

Garner resigned on Monday, having been poached by Nationwide to head up the building society.

Speaking at the ECTA Regulatory Conference in Brussels on Tuesday, the embattled TalkTalk boss said:

"I wish him well and congratulate him. Joe’s a very decent man," Harding then pushed aside the niceties to once again lobby for regulators to force BT to divorce itself from Openreach.

"It does leave BT with a problem," she said. "The last two chief executives of Openreach wanted to run a big, public company, and any decent candidate will want to do the same. So, what’s good for Joe does create a challenge for [BT chief] Gavin Patterson."

Harding was clearly suggesting that BT would do a better job of retaining its talent at Openreach if it was spun out into a separate FTSE 100 company.

Her comments came during a panel discussion titled "Investing in the digital highways of the future". The focus was on telcos across Europe, but much of the discussion returned to the current market in the UK.

Nonetheless, it took an awfully long time for any of the speakers to mention Virgin Media.

Eventually, Tele2 CEO Allison Kirkby mentioned the cable company. She had previously worked at VM as a senior beancounter.

"Why isn’t Openreach spun off?" she asked, before adding: "There is another big player in the UK called Virgin Media and the issue is they don’t wholesale but they led the way in fibre investment … how can the different players not join up to enable joint investment?"

The panel failed to offer up a clear response.

The Register sought a more direct reaction from Harding. We asked the TalkTalk boss what she had made of Virgin Media's chief Tom Mockridge recently coming out in support of Openreach remaining wedded to BT.

"Tom’s entitled to his view; clearly I don't agree with him," she told your correspondent.

"The challenge on Virgin Media as a viable, alternative infrastructure provider is that they have no wholesale haul and a system stack that makes its extremely difficult for unbundlers to connect with," Harding added.

During the panel confab, Harding argued that watchdogs needed to stop attempting to "second-guess how people will act" in response to fast-changing tech in the telco market.

Such "behavioural regulation", she claimed, would prove to be "less effective".

After the session, Harding told El Reg that it had been wrong for critics to claim that TalkTalk had failed to invest adequately enough in its systems.

When quizzed about planned changes to the budget ISP's email service that were slipped out before the attack on TalkTalk's systems in October, Harding declined to comment.

Instead she appeared to conflate the two issues and said she was unable to speak about specifics while a criminal investigation was ongoing. ®