Hold on, France and Russia. Anonymous is here to kick ISIS butt 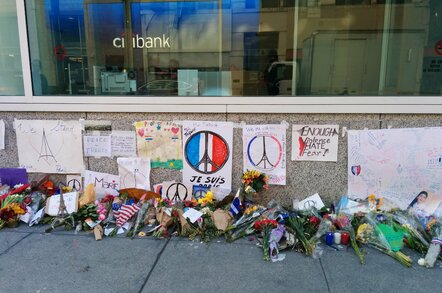 Tributes ... Flowers and posters laid near the French Embassy in San Francisco today

As world powers prepare to bomb barbaric ISIS into the medieval age it so dearly craves, in the wake of the Paris attacks Anonymous too has declared war on the terror group.

"To defend our values and our freedom, we're tracking down members of the terrorist group responsible for these attacks. We will not give up, we will not forgive, and we'll do all that is necessary to end their actions," said a video posted online.

The campaign, dubbed #OpISIS and #OpParis, will be aimed at shutting down websites and social media accounts used by terrorists to recruit sympathizers and support for their cause. The hacking group declared a similar campaign after the Charlie Hebdo massacre, and claims to have shut down thousands of Twitter accounts run by ISIS.

On Monday, Anonymous has already stirred the waters by naming US content-delivery provider Cloudflare as one of the firms keeping ISIS online. It's not the first time the group has made this claim, and in 2013 the US House Committee on Foreign Affairs (specifically, its Subcommittee on Terrorism, Nonproliferation, and Trade), heard similar accusations.

"A website is speech. It is not a bomb. There is no imminent danger it creates and no provider has an affirmative obligation to monitor and make determinations about the theoretically harmful nature of speech a site may contain," said Cloudflare's CEO Matthew Prince at the time.

Cloudflare provides support services for a lot of websites that makes it easier for them to resist online attacks. The firm has managed the WikiLeaks website in the past, and – while it's possible they could be hosting sites linked with ISIS – the firm has yet to respond to the new allegations. ®