A different kind of dream catcher 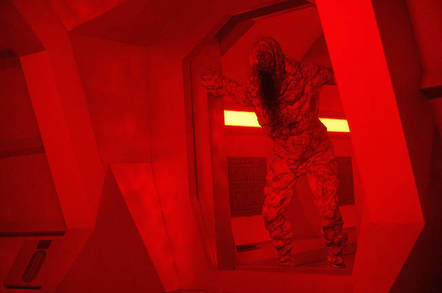 When someone tells you not to look, what do you do? Stare incessantly, of course. Mark Gatiss – dark comedy master and the writer of this week's episode, Sleep No More – knows this only too well.

And with a monster to boot that has the same cavernous mouth as UKIP loony, Nigel Farage, we'll probably all struggle to get some zeds tonight.

There's something absurd and very funny about the sleep in your eye slowly forming into a, um, bogeyman. The Doctor prefers to "name things", before he playfully settles on Clara's "Sandman" suggestion for the beasts.

But they really do look like human-sized bogeys, even if they turn to dust at the moment of destruction.

I'm a big fan of Gatiss and his fellow comedy pal Reece Shearsmith, who appears in this ep as Rassmussen – the cuckoo inventor of the Morpheus wide-awake pods, which bestows upon humans "the whole nocturnal experience in five minutes", thereby allowing them to avoid a little lie-down for up to a month.

And, it may be a coincidence, but did anyone else spot that this is episode Number 9? Shearsmith and another League of Gentleman alumni, Steve Pemberton, write and star in the excellent Inside No. 9.

Sleep No More certainly has all the hallmarks of Shearsmith and Gatiss's searingly morbid humour along with the voyeuristic elements (courtesy of the creepy, over-your-shoulder POV of the dust watching the crew).

Once again, we are greeted with hybrids. This time in the form of an instant army of human-like "grunts" who are grown in hatcherys and spout poorly-formed sentences, such as "Sleepmen bad. Kill Sleepmen."

The Doctor also tells us that "the sleep in your eye has turned into a carnivorous lifeform", a new lifeform that Rassmussen says is the future.

But to our Time Lord, Rassmussen has "created an abomination" – another hybrid as Patient Zero is shaken from his sleep.

Much of this ep is a pleasing monster-chasing romp high up above Neptune, but it's a mystery, too: like having something puzzling on your mind that keeps you awake all night.

It creates a nice bit of tension as the Doctor says at the end of Sleep No More that "nothing makes sense", before whizzing off in the TARDIS with Clara.

Clara, of course, is temporarily trapped in the "inky pool" of sleep as she is sucked into one of the pods – leaving us again with feelings of uncertainty about her fate. ®