Is 10Mbps pledge only on downstream? Wait and see 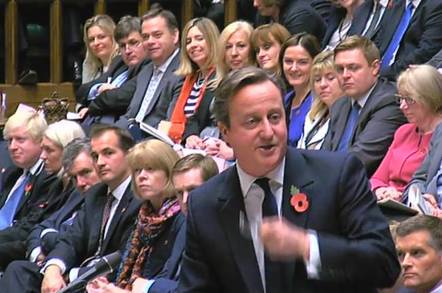 It has been three years since countryside lobbyists demanded a legally binding promise from the UK government on broadband speeds – but the wheels are only now starting to turn.

On Saturday, Prime Minister David Cameron pledged that everyone across Blighty should be given a legal right to request a 10Mbit/s broadband connection by May 2020.

Downing Street did not reveal whether 10Mbps applied to upstream and/or downstream speeds, however.

The Register sought comment from the Department of Culture, Media and Sport – the government office tasked with overseeing the rollout of faster broadband networks to most (if not all) of the country.

A spokesbeing at the Ministry of Fun told us: "Whether the 10Mbps will also apply to upload speeds will be something the consultation (expected early 2016) will look at – we'll also be doing detailed work with Ofcom on this."

The PM confirmed that work on a broadband Universal Service Obligation (USO) was finally under way. But it's worth noting that Number 10 chose its words carefully: Downing Street said it was the government's "ambition" to gift British taxpayers across the land with a legal right to request broadband speeds of 10Mbps.

Readers with longish memories will recall the Tories using the word "ambition" for bringing the best broadband network in Europe to 90 per cent of properties in the UK by 2015. But we all know how that turned out.

On USO, Cameron had this to say:

Access to the internet shouldn’t be a luxury; it should be a right – absolutely fundamental to life in 21st century Britain. That is why I’m announcing a giant leap in my digital mission for Britain. Just as our forebears effectively brought gas, electricity and water to all, we’re going to bring fast broadband to every home and business that wants it.

That’s right: we’re getting Britain – all of Britain – online, and on the way to becoming the most prosperous economy in the whole of Europe.

Culture Secretary John Whittingdale chimed in to add that broadband coverage had "reached more than 83 per cent of UK homes and businesses". He also claimed that the government's "superfast programme" (the taxpayer-backed £680m BDUK project – the funds for which were eventually all bagged by BT) was "on track to extend [deployment] to 95 per cent [of premises] by the end of 2017."

Perhaps, compared with back in 2012, it's a little easier now for the government to make such a pledge on USO, given that it's not expected to kick in until three years after faster broadband speeds should have reached most of the population.

Five years after abandoning Labour’s fully funded commitment to Universal Broadband, the government’s "superfast" broadband rollout is still being hit with delays and at the mercy of a single provider ...

The government’s lack of digital vision is a threat to our economic future. We need to see how this new pledge will be funded and when consumers and businesses will actually see the benefits.

The Reg asked the DCMS if any funding for USO would be flagged up by the Chancellor in the Autumn Spending Review on 25 November, but it declined to comment.

“It is a victory for the CLA’s long-running campaign for universal broadband and our work will continue to ensure that this pledge becomes a reality for every home and business in rural areas.”

The group complained in 2012 that between 15 and 20 per cent of people living in rural areas remained unable to receive "anywhere near" the government's broadband benchmark of "at least" a 2Mbit/s downstream connection.

In case you wondered, the current USO for internet access is a pathetic 28.8Kbps. Yup, the '90s called. It wants its dial-up modem back. ®