Boffins throw hats in air, then hold them out for money 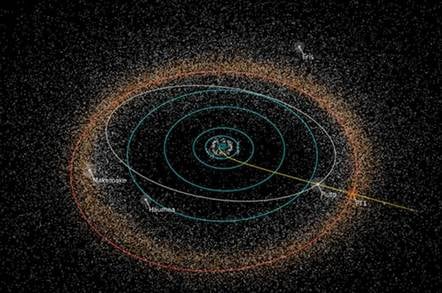 New Horizons has made its final course correction, and is on the way to the Kuiper Belt.

The 20-minute hydrazine burn announced by NASA has put the probe on course for a rendezvous with 2014 MU69.

The four burns – on October 22, 25, 28 and November 4 – are the most distant trajectory corrections ever executed. After a presumably nervous wait (since it takes around 4 ½ hours for communications to arrive from the probe), NASA says its Deep Space Tracking network received telemetry on Wednesday night (US Eastern time) that the burn went as planned.

The mostly-sideways thrust, the space agency says, gave New Horizons a 57 metres per second nudge in the direction of 2014 MU69, more than 1.6 billion km past Pluto, and the probe will reach the target in a little more than three years.

By comparison to budgets, the burn was the easy part. Between now and 2018, NASA has to secure budget for the extended mission.

The New Horizons team will put its formal proposal to the agency early in 2016, and if it can secure funding, New Horizons should get even closer to 2014 MU69 than its 12,500-km Pluto fly-by. ®