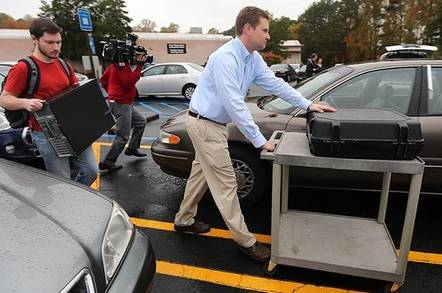 The US state of Georgia is delving into a claim that a misplaced electronic ballot box may have swung a key vote.

On November 3, in the county of DeKalb just east of Atlanta, LaVista Hills held a vote on whether to become a city. In a closely run race, the motion was defeated by 136 votes – less than one per cent of the electorate.

Leonard Piazza, who works in the county's office of voter registration and elections, claims a mislaid memory stick is proof the count was bungled – or worse, rigged.

On Thursday, he told Channel 2 Action News he found a memory card of the type used by the state's voting machines loose in the office, and fears votes stored on the device were not counted.

Citizens in the state use Diebold computers to vote in elections and referendums, their votes being electronically stored and counted.

Piazza claims that when he told his superior about the misplaced memory stick, and the possibility of uncounted votes, she refused to investigate it, and placed him on administrative leave.

On the orders of Georgia Secretary of State Brian Kemp, a formal investigation is now underway into Piazza's claims: officials have confiscated the memory stick and one of DeKalb County's voting machines used in the LaVista Hills ballot.

"As Secretary of State I take any allegations of elections fraud seriously," said Kemp.

"Given the serious nature of these allegations, I have asked the Center for Election Systems at Kennesaw State University and the GBI [George Bureau of Investigation] to assist in this investigation. I asked the GBI to assist due to the alleged theft of secured memory cards and fraud allegations. Once completed, the investigation will be presented to the state elections Board. We will have no further comment until that time."

Meanwhile, Piazza himself has come under scrutiny. He previously worked for an election board in Pennsylvania before being let go. He sued his former employer over claims that he was removed from his job because he wanted to expose corruption in the voting system.

Piazza's boss Maxine Daniels says the whole thing is a case of a disgruntled employee making waves, and insists the vote was fair. ®