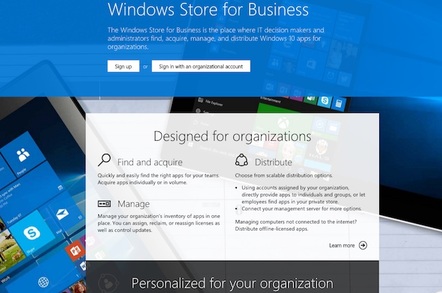 Microsoft's wanted an enterprise app store for ages, but hasn't been able to get one going because one the many messes in Windows 8.x was “side-loading”, a strange Microsoft's method for allowing businesses to install Windows apps en masse to their PC fleets.

Now it looks like Redmond's revving a replacement, as a new Windows Store for Business has emerged into the sunlight.

The store promises the chance to “Quickly and easily find the right apps for your teams” and to “Acquire apps individually or in volume.” Users can also expect to “Manage your organization’s inventory of apps in one place.”

“ You can assign, reclaim, or reassign licenses as well as control updates,” the blurb continues, also promising access to “Thousands of Windows Store apps across multiple categories … available for volume acquisition and distribution.”

Microsoft's threatened to include the business app store in a future Windows 10 upgrade, possibly as soon as November. Redmond's not confirming anything other than the existence of the page we've linked to above, so we're in the dark about just what might happen and when.

Vulture South has, however, heard a hint that the local version of Microsoft's Ignite conference will be blessed with a decent announcement. That event kicks off on November 17th. ®