Seeks next generations of 'nauts 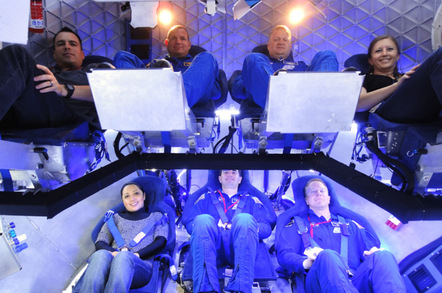 NASA has put out a call for the next generation of astronaut candidates, in anticipation of regaining the ability to put people aloft space aboard US-built spacecraft.

The space agency's head honcho, Charles Bolden, said: "This next group of American space explorers will inspire the Mars generation to reach for new heights, and help us realize the goal of putting boot prints on the Red Planet.

"Those selected for this service will fly on US made spacecraft from American soil, advance critical science and research aboard the International Space Station, and help push the boundaries of technology in the proving ground of deep space."

From 14 December until mid February, NASA wants to hear from those pilots, engineers, scientists and doctors who think they've got the Right Stuff.

It says wannabes' CVs must include "a bachelor's degree from an accredited institution in engineering, biological science, physical science or mathematics", and "at least three years of related, progressively responsible professional experience, or at least 1,000 hours of pilot-in-command time in jet aircraft".

The "Astronaut Selection and Training" guide (PDF) explains the specific basic requirements for physical eligibility are: "Distant and near visual acuity must be correctable to 20/20 in each eye, blood pressure not to exceed 140/90 measured in a sitting position, and the candidate must have a standing height between 62 and 75 inches."

Those finally selected might end up strapped into Boeing's CST-100 Starliner, the SpaceX Crew Dragon or NASA's own Orion capsule, which "will launch astronauts on missions to the proving ground of lunar orbit where NASA will learn to conduct complex operations in a deep space environment before moving on to longer duration missions on its journey to Mars".

Brian Kelly, director of Flight Operations at the Johnson Space Center, described right now as "an exciting time to be a part of America’s human space flight program". He added: "NASA has taken the next step in the evolution of our nation’s human spaceflight program – and our US astronauts will be at the forefront of these new and challenging space flight missions. We encourage all qualified applicants to learn more about the opportunities for astronauts at NASA and apply to join our flight operations team."

There's more on the Astronaut Selection Program here, and NASA will be accepting applications via USAJOBS. Non-US citizens need not apply.®