That SQL background may be more useful than you think... 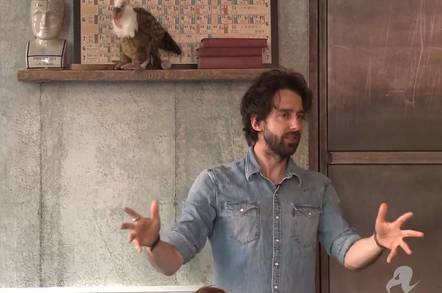 Reg Events If you’re dreading the pressure cooker of a family Christmas, we challenge you to change your perspective by coming to our 1 December lecture with SQL specialist and former Iraq hostage, Peter Moore.

Long-time Reg reader Peter Moore will be telling us how he went to the office one day in 2007 to work on a finance system for the Iraqi government, and finally made it home over two and a half years late after being taken hostage by one of Iraq’s many militias. Ticket details here.

Despite bouts of what he describes with admirable understatement as “unnecessarily harsh” treatment, including mock executions and beatings - as well being handed an Xbox as entertainment - Peter also mentally designed new computer systems and a metro transport network.

As well as putting the minor irritations of family life into perspective, Peter's talk will also illustrate how his “techie” outlook may have proved invaluable in surviving a horrifying experience that can break those with a traditional military background.

As usual the formal lecture will be followed by a no-holds barred Q&A session, before we all wind down over a couple of beers. We guarantee it will be our most gripping lecture yet.

Peter is just one third of our excellent speaker lineup this year.

On 17 November, Anders Sandberg of The Future of Humanity Institute at Oxford University will be covering the ethics and technology that will allow us to live forever, as well as touching on global catastrophic risk, cognitive biases, cognitive enhancement, collective intelligence, neuroethics and public policy. Ticket details are here.

On 24 November, Professor Nick Reed of the Transport Research Laboratory will be separating fact and fiction on driverless cars. And you may be surprised just how much fact there is. Details here.

So if you want to stimulate your grey matter before subjecting it to the rigours of the festive season, you’re going to want to get along to one or all of our talks. See you there. ®