Pair must cough up $750,000 in personal hotspots disruption probes 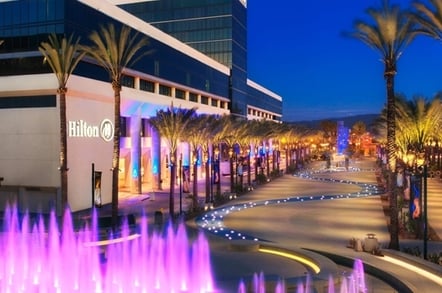 The US Federal Communications Commission (FCC) has fined Hilton Hotels and M.C. Dean in two separate probes into Wi-Fi jamming.

The watchdog said M.C. Dean, an IT services provider, must pay a $718,000 charge for knackering personal hotspots at the Baltimore Convention Center in Maryland. Hilton will have to pay $25,000 and turn over additional network information after it was accused of obstruction in a throttling investigation in Anaheim, California.

According to the FCC, its investigators have been trying to look into whether the Anaheim Hilton blocked guests from logging into their own Wi-Fi mobile hotspots, and instead forced them to use the resort's network at charges of up to $500.

Hilton has not yet been found to have actually jammed Wi-Fi hotspots. Rather, the FCC said it is fining the hotel chain $25,000 for obstructing its attempts to investigate by withholding information from officials.

"After nearly one year, Hilton has failed to provide the requested information for the vast majority of its properties."

The chain could face further fines if it is actually found to have disrupted hotspot connections and forced users to pay for its on-premises network.

Such was the case with M.C. Dean, which maintained the Wi-Fi network in the Baltimore Convention Center. The FCC said [PDF] it fined M.C. Dean $718k for jamming the personal hotspots of convention-goers and exhibitors in an attempt to force the use of a Wi-Fi service it charged at a rate of up to $1,095 per event.

The commission said it was tipped off when a hardware maker that builds personal hotspots issued a complaint on behalf of its customers who had their devices disabled at the Baltimore Convention Center.

This isn't the first time the FCC has issued hefty fines for Wi-Fi hotspot disruption. Hundreds of thousands of dollars have been coughed up in recent years by hotels and network providers that prevented guests from operating their personal Wi-Fi hotspots in resorts and convention centers. ®

When uploading comments to the FCC, you can now include malware

And this is the agency that wants to regulate the internet