Has Voyager 1 escaped the Sun yet? Yes, but also no, say boffins 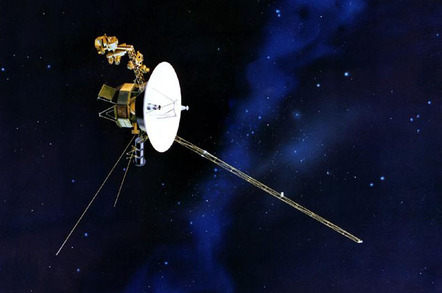 Voyager 1, the deep space probe launched in 1977 and thought to have left the Solar System hasn't entirely escaped the parts of space where Sol holds sway.

So says a new contribution to The Astrophysical Journal Letters, Triangulation of the interstellar magnetic field .

Boffins have debated whether Voyager 1 has left the Solar System for a few years now, after NASA declared it could no longer detect direct evidence of the solar wind. The absence of the stream of particles hurtling out from the sun was taken as evidence Voyager 1 had left the solar system and entered the interstellar medium. But after revisiting Voyager data, the new paper suggests some odd magnetic field readings mean the probe is passing through “a more distorted magnetic field just outside the heliopause, which is the boundary between the solar wind and the interstellar medium.”

"If you think of the magnetic field as a rubber band stretched around a beach ball, that band is being deflected around the heliopause," said lead author Nathan Schwadron of the University of New Hampshire, Durham.

The paper suggests the part of Space in which Voyager 1 is now travelling is at the distended end of the rubber band. More pristine parts of interstellar space apparently lie ahead and once Voyager 1 makes it there we won't see as much magnetic weirdness.

Measuring that data when it arrives will also be just a little bit harder than it was last week, because the last original member of the Voyager team has retired. Larry Zottarelli, aged 80, left NASA's employ this week after 55 years on the job. Zottarelli helped to develop Voyager's on-board computers and has worked on the mission since 1975. CNN reports that he was sent on his way with a handshake from actress Nichelle Nicholls, Star Trek's Lt. Uhura. NASA is reportedly seeking a replacement fluent in FORTRAN, Algol and assembly language for the Voyagers' 250 KHz General Electric 18-bit TTL CPUs, complete with single register accumulator and bit-serial access to 4096-word plated-wire RAM. ®