Valentino Rossi had better watch his back 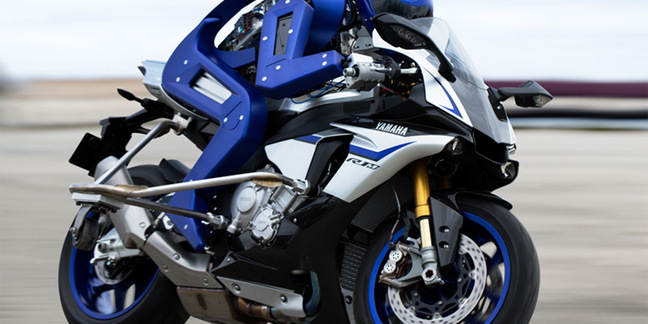 Watch your back, Rossi. Pic: Yamaha

Multiple MotoGP world champ Valentino "The Doctor" Rossi had better watch his back, because Yamaha has just unleashed a motorcycling robot which was "created to surpass you", as a rather creepy video explains.

Yamaha unveiled the "Motobot" at the Tokyo Motor Show on Wednesday. According to the company, it's an "autonomous motorcycle-riding humanoid robot built around a fusion of Yamaha's motorcycle and robotics technology".

It adds: "R&D is currently underway with the goal of developing the robot to ride an unmodified motorcycle on a racetrack at more than 200 km/h. The task of controlling the complex motions of a motorcycle at high speeds requires a variety of control systems that must function with a high degree of accuracy."

It remains to be seen if Motobot does ultimately surpass Rossi, who currently rides for Movistar Yamaha MotoGP. With one race left in the 2015 season, he's leading the title chase, with a seven point advantage over team-mate Jorge Lorenzo.

However, he'll start the final event in Valencia at the back of the grid, having been penalised for a controversial collision with Honda's Marc Márquez in the Malaysian GP. Márquez crashed out after Rossi allegedly deliberately forced him off the track.

We wonder if future robotic motorcycle gladiators will indulge in such behaviour as part of their drive towards world domination. ®

Thanks to David Bridwell for the heads-up.