Rosetta has both delighted and upset astronomers after the probe sent back data that indicates the discovery of molecular oxygen on Comet 67P/Churyumov–Gerasimenko.

The scientists are excited because the O2, detected in the thin cloud of stuff surrounding the comet, is going to give them a pile of new science; and upset because it's not really supposed to be there. After billions of years, most of the molecular oxygen was expected to have reacted with hydrogen to form water.

The fact that the oxygen has survived suggests the comet – and probably other bodies in the solar system – must have formed so gently that it never became hot enough to spark oxygen reactions.

The first detection of the oxygen molecules happened more than a year ago, but was so unexpected that the mission decided to monitor it rather than announcing it immediately.

Oxygen is plentiful – it's the third most abundant element in the universe – but it's also highly reactive, and usually turns up bound to other atoms and molecules (or with itself, as O3, ozone). 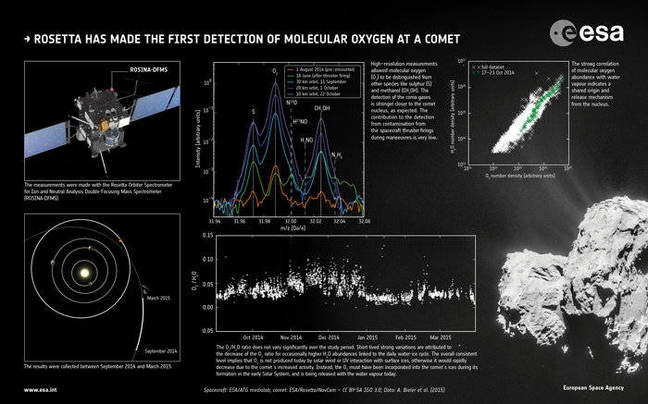 The ESA's infographic explaining the oxygen discovery. Click to embiggen

In data collected between September 2014 and March 2015, the mission found that O2 makes up 3.8 per cent of the cloud surrounding 67P, which is an order of magnitude greater than expected.

As principal investigator of Rosetta's spectrometer Kathrin Altwegg of the University of Bern put it in the ESA's announcement: "Even though it must have been incorporated into the comet during its formation, this is not so easily explained by current Solar System formation models."

While oxygen can be released from more complex molecules under bombardment from photons or electrons, that kind of process would have been observable, since the amount of oxygen the spectrometer spotted would change depending on which bit of the comet was lit by the sun.

Since the concentration of O2 doesn't vary with 67P's orientation, University of Michigan physicist André Bieler told Discovery that it must be "present in the whole body."

Bieler, lead author of the paper describing the discovery (here), says 67P must have captured its molecular oxygen billions of years ago when it first formed.

He told Nature "We think this result is of interest beyond the cometary community," because it demands a re-think of models of solar system formation.

In the scientific paper, Bieler and his co-authors note that primordial oxygen is so unusual that "solid O2 has not yet been detected in interstellar ices." ®