NSA can keep illegally spying on Americans into November 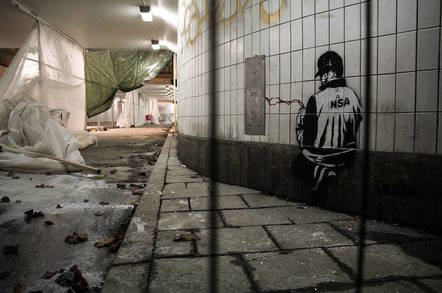 The NSA can continue its illegal spying on Americans for one final month after a federal judge dismissed a lawsuit that wanted it shut down immediately.

The New York Appeals Court declined to block the surveillance program, which is due to be overhauled by the end of November, because the US Congress had already approved a "transition period" for the spying system.

"That orderly transition requires that the government retain the tools it has been using to investigate threats of foreign terrorism until new tools may be put in place," said Judge Gerard Lynch in his opinion [PDF].

"Congress has balanced privacy and national security by providing for a 180‐day transition period, a decision that it is uniquely suited to make. Congress's decision to do so should be respected," he argued, with the backing of the two other appeals judges.

Since that transition period is going to end next month, the court decided not to weigh in on the topic of whether the NSA program – in this case, the use of section 215 of the Patriot Act to store records of all phone calls in the United States – was constitutional or not.

"We decline to reach the constitutional issues, and deny a preliminary injunction at this time, as the effect would be limited to the time before November 29, when the nature of the harm complained of by Appellants will change, and would require resolving momentous Constitutional issues," the decision read, adding: "We do not address whether Appellants' claims will become moot on November 29, and leave this, and all other remaining questions, to the district court in the first instance."

Or, in other words, we are staying the hell out of this one.

Make sense of this for me, will yer?

The fact that the US security services were using a very broad interpretation of one part of the Patriot Act of 2001 to justify mass surveillance of telephone calls was revealed by documents released by Edward Snowden in 2013.

That approach was subsequently found to be illegal and in June 2015, Congress passed a law that ended the collection of data and required the NSA to get court approval before searching phone company records. The law gave the government until the end of November to make the change, but also created the unusual situation where the government was allowed to continue running an illegal service for six months.

In an additional irony, the court that refused to shut it down is the same court that found the program was illegal, as it had not been properly authorized by Congress.

It is still possible that the program is shut down a few weeks early however: there is a second lawsuit in Washington that is seeking the same thing. The judge has yet to rule in that case. ®