“Read the terms and conditions” is good advice for anybody, but especially if you're participating in a hackathon. Otherwise, as participants in a Telstra hackathon are finding, you might be giving up more than you intend.

Lifx engineer Jack Chen – @chendo on Twitter – has noticed that the terms in the carrier's Internet of Things challenge seem to go beyond what people might expect if they're not paying attention.

The contract (PDF) that challenge participants have to sign contains a clause which seems to the non-lawyer to go far beyond what someone might develop for the hackathon itself.

The document seems to plant Telstra's flag in a participant's development work not just during the challenge, but for the following 18 months.

For any “New IP” (as the contract puts it) developed in that period, the participant agrees to:

I was gonna do @Telstra’s IoT challenge until I read the terms. They want FROF for ANY IP you develop 18 months after, which is bullshit.

I was gonna do @Telstra’s IoT challenge until I read the terms. They want FROF for ANY IP you develop 18 months after, which is bullshit.

If there is wriggle room here, it's in whether Telstra merely failed to explain what constitutes “New IP” in the agreement: 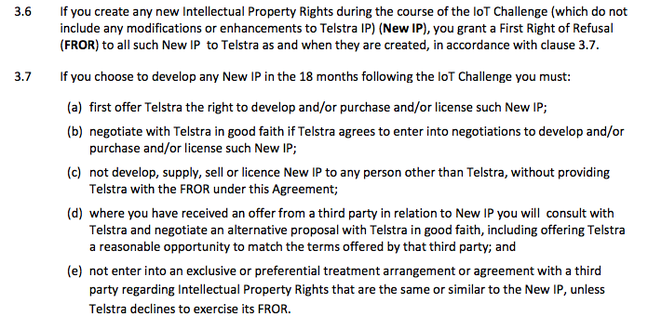 Does this constrain the “New IP” to IP that has some association with the challenge, or not? Vulture South has asked Telstra to comment.

Telstra should know better than this, after a 2013 hackathon at the Sydney Opera House attracted criticism for requiring participants to sign away many rights to their ideas. ®

Update: Telstra has contacted Vulture South to explain that the clause is only intended to apply to IP associated with stuff submitted for the IoT challenge. A spokesperson said in an e-mail to The Register:

"Telstra can confirm that as part of the 2015 IoT Challenge, we won't own participants' IP or get any free licensing. The participation agreement requests that Telstra is given an opportunity to license any IP developed during the challenge (New IP) for a period of 18 months following the challenge. It does not assume any kind of ownership or copyright of the IP, which remains with participants, nor does it enforce any particular licensing or royalty arrangement" (emphasis added).

Given that the Big T has more lawyers on hand than your average parliament, Vulture South reckons the need for a clarification means someone knocked the document off last thing on a Friday afternoon. ®