The latest loss of love from new gTLDs 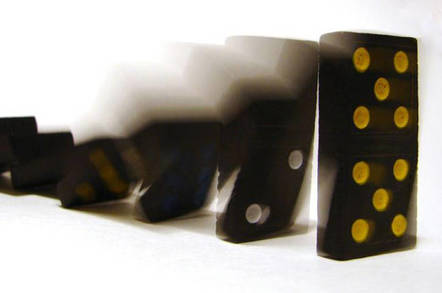 Verisign, operator of the .com and .gov registries as well as two of the internet's 13 root servers, has warned that the "unprecedented" introduction of hundreds of new dot-word domains may make the internet unstable.

In a quarterly filing to the US Securities and Exchange Commission this week, the tech biz included extensive details about the new generic top-level domain program run by domain overseer ICANN under "risk factors" that could impact its financial health.

Generic top-level domains – gTLDs – are things like .book and .science (eg: theregister.science) which exploded onto the internet in 2014 and into 2015.

"Under its new gTLD program, ICANN has recommended delegations into the root zone of a large number of new gTLDs," it notes. "In view of our role as the Root Zone Maintainer, and as a root server operator, we face increased risks should ICANN's delegation of these new gTLDs, which represent unprecedented changes to the root zone in volume and frequency, cause security and stability problems within the DNS [domain name system] and/or for parties who rely on the DNS."

And what risks are those? "Potential instability of the DNS including potential fragmentation of the DNS should ICANN's delegations create sufficient instability, and potential claims based on our role in the root zone provisioning and delegation process."

Verisign also warns of "security, stability, and resiliency degradation if the delegation of new gTLDs into the root zone causes problems to certain components of the DNS ecosystem or other aspects of the global DNS, or other relying parties are negatively impacted as a result of domain name collisions or other new gTLD security issues, such as exposure or other leakage of private or sensitive information."

This is not the first time that Verisign has warned about the potential stability impacts of the program. A previous report outlined extensive concerns, and prompted ICANN's Security and Stability Advisory Committee (SSAC) to dig into the issue. A specific review of potential stability issues was also due to start work in Q3 of this year but has yet to do so.

The program has seen over 750 new internet extensions added to the internet in the past year, with another 500 planned within the next 12 months. It is a huge expansion, given that for the past decade there have only been a little over 300 extensions on the internet.

Verisign's rundown of business risks spends quite a lot of time worrying about the impact of this program, from increased competition to the fact that its contracts to run the .com and .net registries may change in future.

Verisign is not the only one hating on the new gTLD program right now. BIND author and maintainer of the F root server, Paul Vixie, derided the program this week as a "money grab."

Speaking at a conference in Melbourne, Vixie was asked about the new extensions and responded: "I think it is a money grab. My own view is that ICANN functions as a regulator, and that as a regulator it has been captured by the industry that they are regulating. I think that there was no end-user demand whatsoever for more extensions."

He also attacked ICANN's role in making the program happen by noting that it is supposed to "serve the public not the companies" and that there is no "actual public benefit reason" to create more top-level domains. ®