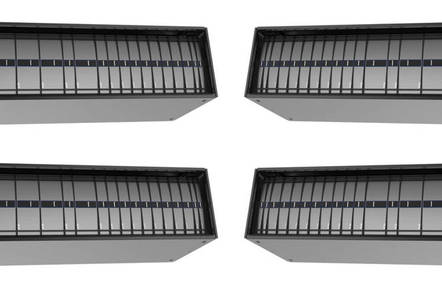 Quantum has given its StorNext file and data management product a hardware makeover, with faster Xcellis hardware taking up less rackspace than existing components.

StorNext provides access to a virtualised single repository with four tiers. It serves primary data from its drive array to users' workstations and applications via Fibre Channel, NAS, and its own DLC (Distributed LAN Client) protocol. The primary data can be stored on Lattus object storage arrays once its status changes to secondary data or to Scalar tape or its QCloud when it needs longer-term and less speedy access than object storage provides. StorNext metadata controllers keep track of where data is located.

Use cases depending on complex workflows involving large collections of multi-size, multi-age files, stored in several tiers, are where StorNext excels and it is popular in the media and entertainment industry, life sciences, satellite imagery analysis, seismic data and video surveillance areas.

Quantum's senior director for product marketing, Dave Frederick, positioned StorNext and Xcellis: "StorNext is the data management system that includes the file system, policy engine, data mover, single namespace. Xcellis is the next generation of hardware appliance(s) on which StorNext is deployed. It is a replacement product for previous versions of StorNext metadata controller appliances."

He said, "Xcellis ... allows all users, regardless of connection type, to access the same data and even more interestingly, across all systems in the multi-tier environment managed by StorNext, including object storage, tape, and cloud." 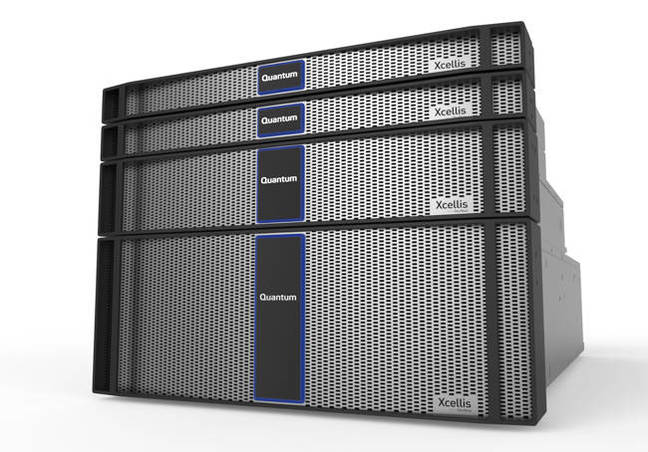 There are optional quad 1GbitE and dual 10GbitE connectivity options for NAS and DLC client access.

It can store 10 billion unmanaged files (1.4 billion managed), twice as much as before, with 64 virtual file systems and manage 1.4PB of capacity. By adding in Lattus, tape and QCloud capacity can go up to hundreds of petabytes. We're told that system bandwidth rises as the number of drives increase:

Frederick said: "Due to a new method of organising system metadata and user data, customers can now scale continuously from the minimum configuration to the maximum simply by adding storage arrays."

Xcellis offers unified access to SAN, NAS and DLC clients and can store metadata and users' data in the same enclosures*. The previous StorNext hardware featured separate metadata and user data storage, as well as a separate DLC gateway and NAS gateway. 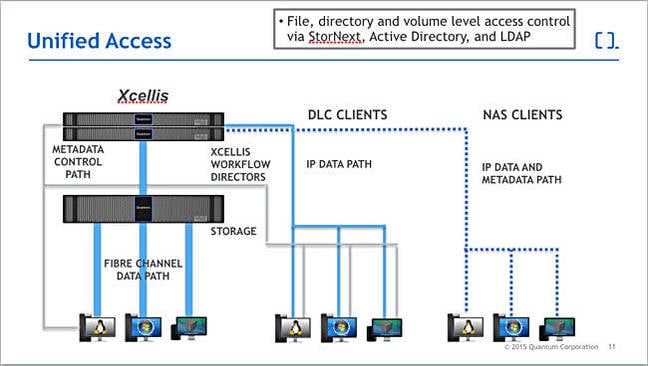 On the management side: "StorNext Connect management and monitoring software has been enhanced for Xcellis and now includes customer installation support. Customers are guided through the entire set up process including automated disk array provisioning, and client and storage device discovery and setup. StorNext Connect also provides real-time and historical performance information. Multiple metrics can be viewed simultaneously to see relationships between bandwidth, latency, capacity, and client utilisation."

* Third-party storage can be selected to store users' data. In that case Xcellis does require separate Quantum QXS metadata storage.