Top watchdog probes IBM over 'transactions in US, UK, Ireland' 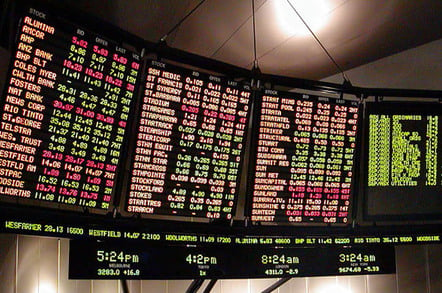 IBM's stock price has taken a hit after the tech titan revealed it is under investigation by the US Securities and Exchange Commission (SEC).

Big Blue said in its latest 10-Q filing that for the past two months, the financial watchdog has been looking into its accounting practices.

"In August 2015, IBM learned that the SEC is conducting an investigation relating to revenue recognition with respect to the accounting treatment of certain transactions in the US, UK, and Ireland," IBM admitted in the filing.

"The company is cooperating with the SEC in this matter."

The disclosure was buried in a regular quarterly report that publicly traded companies are required to give the SEC. The 10-Q reports often list potential risk such as investigations and litigation.

A Big Blue spokesperson said the enterprise IT giant was confident the investigation would not be a major issue going forward.

"IBM has a rigorous and disciplined process for the preparation of its financial statements and the reporting of revenue," the IT giant said in a statement to the media on Tuesday.

"We are confident that the results and information we report have been appropriate and consistent with GAAP."

In this case, however, the market decided the disclosure was more than just business as usual for IBM. The company's stock fell nearly 4 per cent, down $5.66 to $138 per share, after the SEC filing was made public.

IBM has had its share of dealings with the SEC in recent years. In 2014, the US watchdog poked around Big Blue's reporting of financials for its cloud business. That probe was eventually dropped without any charges or penalties. ®