Dell (Michael, that is): EMC's DSSD a 'game changer'

Founder likes what he found when poking around EMC's labs, he tells El Reg 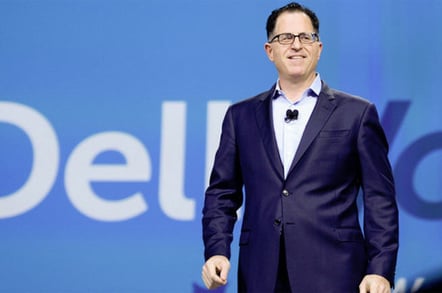 Walking around Dell World 15 with former Dell hyperconvergence guru Jimmy Pike was a bit like being with a rock star. As we strolled the corridors Pike, now a consultant and commentator at tech analyst firm Moor Insights & Strategy, fell into old colleagues who greeted him like a long lost friend.

Even founder and chief executive Michael Dell came over to shake his hand (and mine, by association)

Pike’s knowledge of Dell, and in particular its storage and hyperconvergence products, makes him a highly credible and likable commentator.

Speaking about the future of storage and its increasingly central role in enterprise computing, he said: “Flash will be the capacity king in the future” and any vendor without a serious flash product will “go out of business".

Dell made its own announcements on new high-end all flash arrays and it’s par for the course now despite the fact that flash is still relatively expensive when compared with traditional disks. But as Pike points out: “High capacity hard disks are becoming the final resting place for data.”

Data centres, he adds, should now be a mix of software and servers with lots of non-volatile memory, or servers with a bunch of disks.

So what does he think of Dell? Is it doing enough to stave off the growing competition from younger, agile, software-lead vendors such as Nutanix or Nimble?

“Stave off? No not really,” he replies.

I put the question to Michael Dell, asking more specifically if he had been poking around EMC’s R&D lab prior to the deal, to see if there were any jewels lurking behind the scenes that would make the acquisition even sweeter.

“Yes,” he replied, quickly, unequivocally. “DSSD. It’s a game changer.” He wouldn’t elaborate, although his almost triumphant smile was enough to suggest he feels pretty pleased with himself on this one.

“I’m a little shocked at Michael for picking just that one,” said Pike initially before thinking deeper about it and then seeing the potential in developing extremely low latency flash arrays, and how this could fit into Dell’s overall systems vision.

We’ll wait and see how this one plays out, he said, adding that DSSD is still a “future technology” although “exciting” as it’s both software- and hardware-defined.

It will certainly help Dell compete more strongly in the new world of hyperconverged enterprise platforms, if not now then certainly in the next 12 to eighteen months.

Back to the future

DSSD has already made an impact of sorts, at least behind the scenes. Acquired by EMC in May last year, DSSD senior vice president Bill Moore said in March that its array would have face-melting performance.

A Virtual Geek blog in May had already talked up its potential: “It is an insane low latency NVM thing – think tens of microseconds. It’s not DRAM, but as close as you can get with NAND.” EMC has also referred to DSSD as its potential weapon of choice in taking on Oracle’s Engineered Systems.

As The Register revealed in July this year, DSSD’s technology is being used to develop an all-flash array that sits above XtremIO in EMC’s product range. Further details surrounding DSSD are scarce. Michael Dell was keen to keep it that way, at least for the moment, saying: “No products have shipped,” but it’s "very exciting".

From Pike’s point of view, the challenge facing Dell is in its plan to develop an end-to-end enterprise offering for CIOs looking to build private and hybrid clouds with the data centre at its core.

While combining EMC and Dell’s range of products and services (which on the surface look complimentary) should plug some product holes, Pike said there needs to be more innovation. Can DSSD be that killer tech at the core of Dell’s hybrid cloud, data analytics system future?

Interestingly, Dell referred to EMC as “an incubator of new technology” and pointed to Dell’s own increase in the number of patents it has pending (more than 8,000) and its $18bn investment in R&D during the last eight years.

Despite this sizable cash injection in its labs (which includes Silicon Valley and Bangalore in India) DSSD was the only tech given the excited treatment by Dell, and for good reason.

It fits. DSSD will essentially speed-up and improve in-memory databases and high performance analytics to the point at which Dell can re-invent itself as this backbone enterprise system. While the storage market consolidates with Western Digital buying SanDisk, Dell sees his company as being an on-going consolidator in its quest to become “an enterprise solutions powerhouse".

This has gone way beyond storage but the ability to access and manage that storage from across increasingly complex enterprise systems churning out huge amounts of data is where DSSD steps in. It’s about hybrid storage, hybrid cloud, hybrid Dell. ®