If Amazon can have delivery drones, we want them too, says Walmart

FAA gets another license to delay until too late 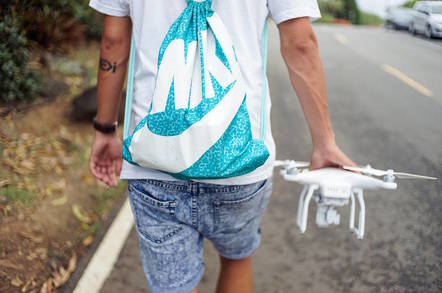 Mega-retailer Walmart has reportedly asked America's Federal Aviation Administration (FAA) for permission to test out the use of drones for picking up and dropping off goods.

The chain, as American as apple pie and union busting, has been testing drone delivery systems indoors but now wants permission to try the hovering gadgets outside. Amazon has already been granted similar permission and other companies are examining drone delivery to skip traffic and distribution problems.

"Drones have a lot of potential to further connect our vast network of stores, distribution centers, fulfillment centers, and transportation fleet," Walmart spokesman Dan Toporek, told Reuters. "There is a Walmart within five miles of 70 per cent of the U.S. population, which creates some unique and interesting possibilities for serving customers with drones."

Walmart has asked for permission for three types of drone operations. Internally the company wants to use drones to fly over its depots checking out how many trucks are in place and ready for loading.

But Walmart also wants to test out drones that deliver purchases from the store to a car in its car park, and to drop goods off at customers' homes – either from a depot or from a delivery truck close by. That would require the permission of people living under the flight path.

As with most of its products, Walmart is sourcing the drones from China, specifically from DJI Technology, which produces the Inspire and Phantom series of consumer drones. The latter model range has become so ubiquitous as to be known as the iPhone of drones among amateur aviators.

Obviously, neither lineup is suitable for Walmart's purposes, but the firm also builds small unmanned helicopters for military and commercial use. Walmart may also be asking the firm for a custom design for drone deliveries.

Faced with falling profits and a negative public perception of their stores, Walmart is keen to try something new. But if past evidence is anything to go by, the retailer will have a long wait ahead.

Amazon, for example, did get permission for outside testing of delivery drones, but it came so late that Bezos' boys and girls had stopped testing the specific model cleared for airborne use and had to move their testing facility to Canada.

El Reg has had its own problems with the FAA, which has kept us waiting for over a year while deciding if the LOHAN spacecraft will be launched. Since the FAA thinks LOHAN might be a drone, it has been grounded for the time being. ®