Bacon as deadly as cigarettes and asbestos 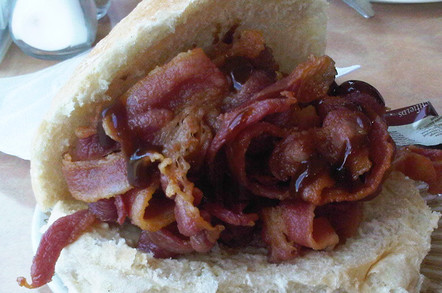 In really, really bad news for bacon lovers, a shock report says the World Health Organisation (WHO) will next week add processed meat to its "carcinogenic to humans" list.

That's according to the Daily Mail, which claims that, according to "a well-placed source", a gathering of international scientists have checked the evidence and decided processed meat merits a top risk ranking, along with alcohol, asbestos, arsenic and cigarettes.

The Mail says processed meat consumption has been linked to bowel cancer, "Britain’s second biggest cancer killer". The Department of Health has tentatively said it "probably" increases the risk of deadly gut rot, but WHO intends to go further by declaring the practice extremely ill-advised.

Those who believe they can still get their meat fix by ditching the processed variety and switching to the fresh red flavour should be warned that WHO also intends to rate this as "probably carcinogenic to humans".

The paper quotes one Betsy Booren, of the North American Meat Institute, who said recently: "If they determine that red and processed meat causes cancer – and I think they will – that moniker will stick. It could take decades and billions of dollars to change that."

In the end, if you continue to eat bacon, it's a toss-up as to whether the bowel cancer will get you before you suffer a heart attack. ®