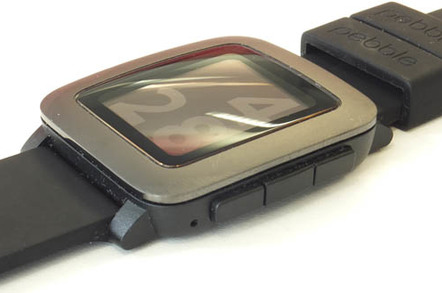 Pebble has strayed further away from its hobbyist DIY roots, with the release of a new firmware that supports Nuance's voice SDK.

The two Pebble watches released so far this year have both incorporated a microphone, but lacked an API to allow Pebble's thriving developer community to take advantage of it.

This has just been added and is supported in the new firmware.

Nuance's speech processing will allow the watch to do much more that it does today: such as voice response to to emails and messages. Nuance, as you'd expect, hopes that voice technology will "hold the gateway to the automated intelligent home" - but needs to embed itself into as many platforms as possible.

Pebble recently announced a more fashion-focused Time Round model which it expects to ship in time for the Christmas shopping rush. At $279 it's more expensive and with a battery life "of up to two days", much thirstier than previous Pebbles.

The latest batch of smartwatches are better looking and do more, but many still appear to be a solution looking for a problem. Last month I tipped Pebble as one of the more likely to find a niche, because of its developer support and low cost. ®