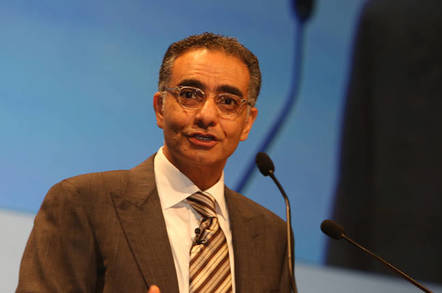 The CEO of ICANN got his facts wrong during high-level talks on limiting the power of the domain-name overseer, it is claimed.

Fadi Chehade gave a presentation to ICANN's Governmental Advisory Committee (GAC) at the organization's triannual meeting in Dublin this week in which he provided his "personal view" on a year-long process to improve the organization's accountability.

ICANN's accountability is a crunch issue at the moment: the California non-profit is edging closer to taking control of the internet's engine room, and keeping it in check is essential to the 'net's future.

How ICANN is governed, and how its decisions can be challenged and overturned by the wider world, is a crucial detail at this stage.

Chehade's address to the government committee contained a number of assertions and comments that were met with incredulity by members of the working group in charge of improving ICANN's accountability – including the group's chairman.

Among the assertions Chehade made were that the working group was focused on a model of governance called the "designator" model. He stated that model would have the power to force the ICANN board to act. And he provided a lengthy document that he claimed represented an objective view of discussions.

All three points were immediately disputed by working group members as inaccurate.

At the core of the problem is that ICANN has a clear conflict of interest, in that the proposals under debate will restrict its own powers. Rather than remain neutral, as they assured the internet community and the US Congress that they would, both staff and board have actively been trying to influence the process.

As well as putting forward counter-proposals, the board has formally objected to the central idea that the internet community has a veto over board decisions, and the ICANN chairman has even threatened to blow the entire process up unless the board gets its way.

Of most concern was the claim that an arbitration process supported by the ICANN board would be binding on the board. While that is the position of ICANN's own lawyers, independent lawyers brought in to review the mechanism clearly stated otherwise – it won't be binding.

Chehade was well aware of that legal memo and the subsequent discussions, but chose to report only his own lawyers' position. He told government reps: "Today the community has no binding mechanism over the board. And so if you look at my deck in section 9 ... there is a description of a binding arbitration mechanism that is essentially taken from the CCWG accountability proposal..."

Soon after, he noted: "There are many ways to reach enforceability. The community is discussing a model called 'the designator,' which is a model to enforce, to go to court and say 'I'm a designator and I want to enforce a binding award'."

Members of the working group who were following the meeting saw this behavior as just the latest effort by ICANN's staff and board to undercut their core proposal that the internet community become a "member" of ICANN.

That determined effort appears to be paying off. After days of behind-the-scenes efforts, the accountability working group announced on Wednesday that it is now looking at a revised version of the designator model rather than the member model that it had previously proposed.

Designator? Member? What does this mean?

Under a "member" model, the internet community would have a legal right to challenge board decisions, whereas under the "designator" model, they would have to follow a lengthy arbitration process run and paid for by ICANN.

With the member model, ICANN's board would be legally obliged to act; under the designator model they would not.

In order to overcome this issue, ICANN has been pushing a range of additional process steps, arguing that such a process would keep any dispute out of the law courts. Ultimately, however, the ICANN board would retain absolute control and the internet community would have no absolute option for enforcement beyond sacking the entire board.

Such was the depth of feeling over the CEO's comments that a co-chair of the working group asked for the floor immediately after Chehade, and proceeded to urge government representatives not to consider his statements accurate.

Matthieu Weill, CEO of France's .fr registry operator Afnic, noted: "I would like to correct a few points about the way Fadi has characterized the work of our group which I think is important for this room to be aware of."

Firstly, the slide deck that Fadi has introduced ... is outdated ... Secondly, Fadi referred to our group as investigating a designator model. That is not adequately capturing where we are now. Where we are now is that our second report is focused on a sole membership model ... in no way is our group at a point where it has been shifting its focus on something else ... It's also useful to report that the arbitration model that has been part of the board comment in the public comment has been assessed ... There are serious legal uncertainties about its efficiency.

Weill also took issue with Chehade's characterization of another key accountability mechanism: the ability to remove board members.

Chehade had posited: "If I'm sitting at the board seat and I know that if I don't do what my community tells me, my neck will be cut tomorrow morning, how will I really pay attention to the public interest? Therefore, if we want to remove board members, we should remove them because they did not adhere to the bylaws, the mission of ICANN."

He again proposed that rather than the organizations that elected individual board members be given the right to recall them for their own reasons, that any recall of a board member instead go through the ICANN-run arbitration process and only be removed if they broke the organization's bylaws. Chehade again noted his "personal view" that such a process would be binding on the ICANN board. 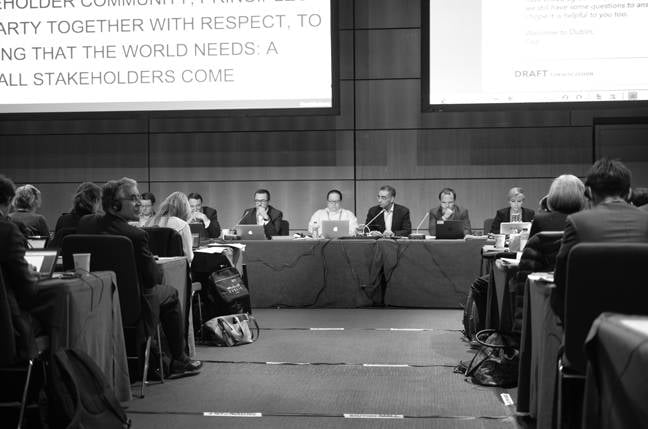 The arbitration process championed by Chehade as central to the new mechanism – the independent review process, or IRP – has itself been the subject of significant criticism and scrutiny, including by the former judges that make up the IRP's independent panels.

In a number of recent decisions, the IRP panel has gone out of its way to criticize the limited grounds under which they were allowed to make decisions, and repeatedly criticized and ruled against ICANN for attempting to limit their ability to gather information about the issue they were investigating.

We asked ICANN if it had a response to the intervention by working group co-chair Matthieu Weill, and if it felt CEO Chehade had misled the world's governments with his presentation. "There is no question about the binding nature of arbitration in the designator model, and ICANN has provided materials to support that position," the DNS overlord told us in a statement. ®