Don't Panic: Even if asteroid showers cause mass extinctions ...

... humans still have several million years in the bank 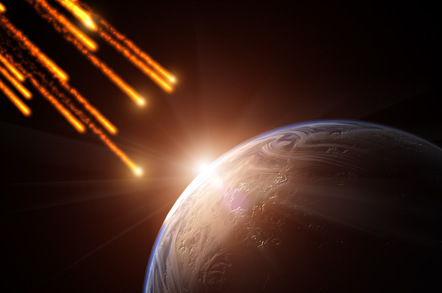 Expect scientists to start arguing about whether there's a match in the long (very long) term between mass extinctions and rising number of comet/asteroid impacts, which, at least according to a new paper, both appear to occur around every 26 million years.

Over the years, there have been many attempts to run that hypothesis, which would also hint at a mechanism for the regular event: the solar system crosses the mid-plane of the galaxy on the same period, and gravity could knock stuff out of the Oort Cloud and send it our way.

The latest salvo comes from Michael Rampino (NASA Goddard and New York University) and Ken Caldeira (the Carnegie Institution for Science), whose work just hit the Monthly Notices of the Royal Astronomical Society.

The pair are cautious about their finding – “the hypothesis of periodic impacts and extinction events is still viable“, they write – but if it's borne out by others, it'll go a long way to settling the question.

The paper, Periodic impact cratering and extinction events over the last 260 million years, points to a roughly 26-million-year period for an upswing in asteroid impacts that Rampino and Caldeira say correlates well with known mass extinctions – including that of the dinosaurs, 65 million years ago.

They constructed a time series of comet impacts like the famous Chicxulub crater, based on more recent and more accurate dating of the various impacts.

Their analysis – using a statistical approach called “circular spectral analysis” – was designed to try and resolve the wide discrepancies that plague dating of craters.

On that basis, they reckon they've accurately dated 37 impact craters in the last 250 million years, and yes, the dates correlate fairly well with major extinction events: “impact peaks correlate with 6 out of a total of 10 extinction events”, they write.

“The apparent clustering of impact-crater ages suggests that some portion of the impactors may be coming in pulses, perhaps as comet showers,” they note.

Interestingly, since Chicxulub is such a strong influence on the geological and fossil records, the researchers also tested their data with that event removed.

And since the last mass extinction the pair identify was just 11.6 million years ago, we're not yet on schedule for global panic, even with a biggie scheduled for a "nearby" pass for Halloween. ®

Video EU-funded gizmo clings to trash like a face hugger

Simulation shows how space junk spreads after a satellite breaks up

Vid US NRL does the arithmetic