Another go with MIPS IoT: Imagination unveils new Creator board 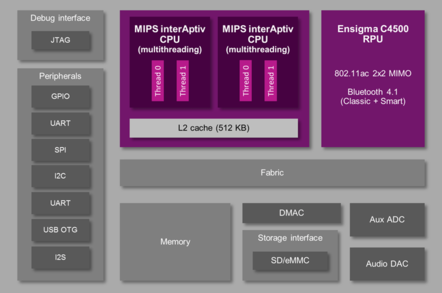 Block diagram for the forthcoming Creator Ci40 board

Imagination Technologies has announced the Creator Ci40, a development board for Internet of Things (IoT) projects, based on the MIPS interAptiv CPU.

Imagination Technologies is best known for its PowerVR GPUs, which are licensed to mobile and SoC (System on a Chip) vendors including Apple.

In late 2012, the company acquired MIPS, giving it a strong CPU offering alongside its GPU designs, though marketing MIPS in a mobile market dominated by ARM and Intel is challenging.

Last year Imagination released the Creator Ci20 development board, to stimulate interest in MIPS development. Unlike the ARM-based Raspberry Pi, the Creator board has Wi-Fi and Bluetooth built in. The Ci20 has a 1.2GHz dual-core MIPS32 CPU and a PowerVR SGX540 GPU.

Full details of the new Ci40 are not yet available, but Imagination is promising a dual-core MIPS interAptiv CPU, a 32-bit design which features "two virtual processing elements (VPEs), or hardware threads, which appear as two complete processors to an SMP operating system."

According to Imagination, this results in higher power efficiency as well as the advantages of hardware multithreading.

The new board will again have built-in wireless, including low-energy Bluetooth (Bluetooth Smart).

Operating system support is set to be revealed on 27th October. This is likely to include Debian Linux as well as Android. ®

That's the price for continuing to cook Apple's cores