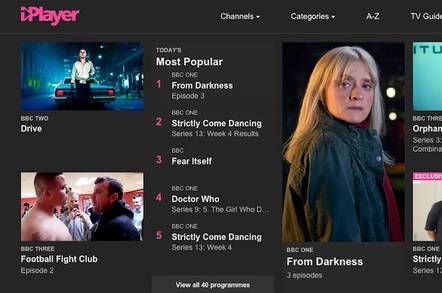 The BBC is trying to block access to iPlayer from UK VPNs, crushing the spirits of those overseas hoping to get a fix of Doctor Who and other British telly.

Auntie said it instituted the blockade to deter pirates from ripping off its dramas, comedies, documentaries and other programs, which are funded by TV license-fee payers in Blighty. It may also have something to do with the broadcaster's plan to charge for streaming in the US next year.

VPNs, aka virtual private networks, have many, many uses – including allowing people outside the UK to stream video from iPlayer. You must be in the UK to watch iPlayer across the internet; using a UK VPN masks your true location, and convinces the BBC you're in the country and thus allowed to view iPlayer.

Now the corporation is putting a stop to all that, or at least it's trying to. If you try to watch iPlayer via a VPN, you'll get this simple error message instead: "BBC iPlayer TV programmes are available to play in the UK only."

"We regularly make updates to our technology to help prevent access to BBC iPlayer from outside the UK, which breaks our terms of use," a BBC spokesperson told The Register on Monday.

"BBC iPlayer is freely available to users across the UK without a VPN, and we also seek to ensure users of private VPNs such as those used by schools and companies in the UK have access."

Quite how the BBC is banning connections to iPlayer via VPNs is not entirely clear: it appears to have drawn up a list of VPN providers and blocked connections from their IP address ranges. People running their own personal VPN service from a lone server could evade the blockade, potentially.

The broadcaster has been a supporter of VPN access until relatively recently: in July the BBC published guides on how to get onto iPlayer using a VPN via a Raspberry Pi.

There's no word what prompted the shift in position by the BBC, but it’s almost certainly down to rights issues. In 2011, a globally licensed, subscription version of iPlayer was tried out in Western Europe, Australia, and Canada, but the project was cancelled in May.

Tellingly, the global player wasn't available in the US, which is one of the BBC's biggest overseas markets: in the States, the corporation and AMC operate a channel called BBC America, which is 90 per cent Star Trek: The Next Generation. (We're only slightly joking.)

The embargo is bad news for VPN providers, many of whom make money from people who want the BBC's content, but don't fancy living within Britain's borders. VPN provider Torguard condemned the blockade as heavy handed and harmful to security.

"BBC is utilizing what I'd like to call a 'nuke' approach. People trying to access the service outside of the UK are now receiving this message: 'BBC iPlayer TV programmes are available to play in the UK only,' the firm said.

"The nuke approach is also hitting all users of BBC that are using VPN software. That means that BBC is forcing its users within the UK to decide if they want the security of a VPN or the access of iPlayer."

Ernesto Van der Sar, founder and editor of the Torrent Freak blog, added: "This effectively stops foreigners and expats from accessing the service, but it also affects license paying UK citizens who use a VPN to browse the Internet securely. They will now have to disconnect their VPN if they want to access iPlayer." ®