Walmart to open-source its cloud-hopping code 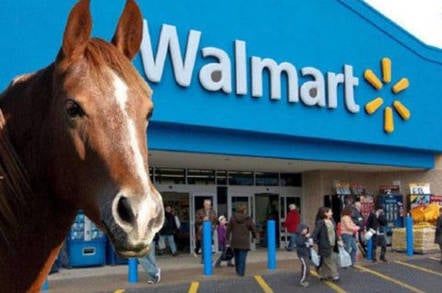 Retail colossus Walmart has open-sourced its own cloud operations code.

Walmart is a big cloud user but says that come the year's fourth quarter its online retailing operations are too big for any one cloud to handle. Portability is therefore something it prizes, hence its 2013 investment in cloud automation startup OneOps, to help it move workloads among diverse public clouds and to automate its in-house operations. That outfit's code, still called OneOps, will soon be available at an eponymous website.

The code offers continuous lifecycle management tools and code to model the behaviour of complex workloads.

The feature Walmart's making the most of, however, is cloud portability code that makes it possible to “cloud shop” so that workloads move among different public and private clouds to take advantage of price differences or to reach scales a single public cloud can't deliver.

Walmart is, of course, a determined foe of Amazon.com. The planned release of OneOps takes that rivalry into the clouds because the bricks and mortar retailer is not pulling any punches in its description of public cloud providers.

Here's how Walmart describes the benefits of cloud portability:

“It’s great news for companies who have considered switching cloud providers but experience the 'Hotel California Effect,' where they can 'check out but never leave' their cloud provider because they’re locked into the provider’s proprietary APIs, architecture and tools."

Walmart's tech team reckon they're doing the world a favour by “enabling any organization to achieve the same cloud portability and developer benefits that Walmart has enjoyed. And by eliminating the barriers that cloud hosting providers have erected, OneOps will drive them to compete based on price, customer service and innovation.”

OneOps code will appear on GitHub before the end of the year, so it will be a while before we can assess whether the code really does work around proprietary APIs.

Between now and then, let's ask ourselves why Walmart's doing this. Lots of organisations open source. But not many organisations do so to damage a rival by attacking one of its rising lines of business. Does Walmart really have it in for Amazon? Or is it just being a good technology citizen? Perhaps one day we'll be able to buy the book about the AWS vs. Walmart cloud wars at a very, very low price. Whether that tome is on a Kindle or a big pile of paperbacks in a Walmart might just depend on the quality of this code. ®