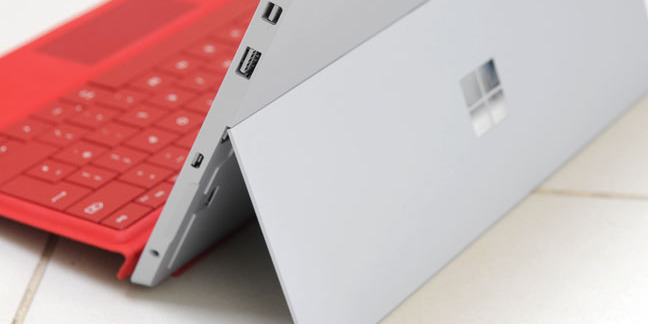 Both HP and Dell were hired as global resellers for Microsoft’s enterprise tab-cum-notebook last month, selling the hardware wrapped in a services blanket, much to the annoyance of some channel types.

But Gianfranco Lanci, president and COO at Lenovo, told attendees at the recent Canalys Channels Forum, “I said no to resell their product”.

Pressed further, he revealed that Microsoft “asked me more than one year ago, and I said no I don’t see any reason why I should sell a product from within brackets, competition.”

He said Lenovo views Microsoft as a “partner on certain things”, and a “competitor” in other scenarios, meaning that “we will need to be a little bit careful”.

The Surface came onto the market in 2012, initially billed by previous CEO Steve Balmer as a design reference point for Windows 8. This followed a period of stagnating innovation from the PC OEMs.

Marius Hass, chief commercial officer at Dell, defended its decision to sell Surface, and told the audience high-end enterprise punters had asked for the devices to be “managed and deployed” by Dell.

He said they wanted the “same eco system” or “consistent engagement model” that Dell provides for its own kit.

“We could tell those customer sorry we are not interested because its a competing product, or we could say ‘Mr and Mrs customer we’ll take care of you’, and that’s what we did”.

Dion Weisler, CEO of HP Inc – the breakaway PC and print division that operationally split from HP in August – said its decision to stock Surface was based on “customer pull”.

“These are customers we have been working with for many, many years and we don’t simply want to cede those relationships to a competitor, so we said 'OK, we’ll participate in that'."

HP sales folk do not get paid for selling Surface, and “we will sell, service and support Surface if the customer absolutely insists upon it but that is not our first preference", said the exec.

Weisler estimated Microsoft has sunk $2bn into Surface, including the write-downs and advertising, and could understand why Redmond had decided to develop its own tabs because it had lost ground to Android.

“Would I spend $2bn creating a Windows Surface type category? No way. Is Michael Dell going to do it? He didn’t do it either and neither did Gianfranco [at Lenovo]. We don’t create those kind of categories on behalf of somebody else," said Weisler.

According to Canalys, Microsoft shipped 1.5 million Surface machines in Q1, and remains a bit part player in the total slab sector, but at least sales are heading in the right direction, finally.