How much? Imation buys Connected Data for $7.5m. No, really 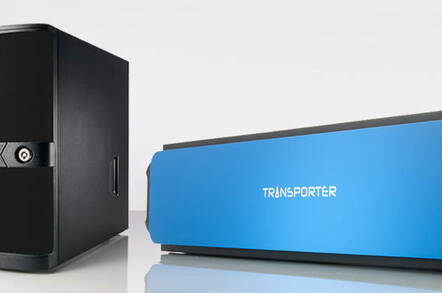 The Clinton Group is the activist investor now in control of Imation’s board and it’s appointed board director Bob Fernander, a Clinton nominee, as interim CEO. He was interim president. Another Clinton guy, Barry Kasoff, gets the interim president gig as well as becoming the grandly-titled Chief Restructuring Officer.

The Clinton Group’s Joseph A. De Perio, non-executive chairman of the Imation board, stated; “Bob is the right interim leader for Imation. He is deeply involved in the execution of the company-wide restructuring plan and has the skill set necessary to maximise the value of our storage businesses, which includes Nexsan, IronKey and now Connected Data.”

Connected Data was founded in 2012 by Geoff Barrall, who had previously founded DataRobotics, the Drobo company, and BlueArc, the NAS supplier bought by HDS. Its product is the private cloud file sync'n'sharing outfit Transporter, the development of which was funded to the tune of a $6m A-round and $260,453 from Kickstarter.

There are more than 130 Transporter enterprise systems installed with 12,500 deployed devices. Connected Data says it has 20 global channel partners and a pipeline of more than opportunities being developed.

Barrall became an Imation board member in December 2014, and was also on the board of Nexsan, which was bought by Imation for $120m in 2013. Imation says’s he’s been instrumental to date on business planning for Nexsan and IronKey.

De Perio said; “Connected Data puts the company’s product roadmap on trend and boosts the enterprise value potential of all of Imation’s storage businesses. Geoff is an exceptional business builder, technologist and inventor, and Imation is fortunate to bring him on as an executive overseeing all of our storage strategies and development.”

The implication is that files stored on Nexsan arrays can be sync’d and shared securely in a Transporter private cloud. Imation also says the acquisition enhances the exit opportunities for its storage businesses.

The price is just $7.5m, not much more than Connected Data’s original funding. Imation says $4.4m of it is Imation stock, at an issue price of $2.75 per share; about $0.5m is cash, and approximately $2.6m in debt will be paid off by Imation. We’re told: “Up to $5m in cash and shares in earn-outs are possible based upon Connected Data’s performance through 2016 and the first half of 2017. Connected Data is projected to have over $7m in standalone revenue in 2016, and the transaction will be immediately accretive to Imation.”

Barrall said: “Our innovative product line represents a major disruption in the field of file sync and share as customers look for cost effectiveness and maximum security. Coming under the Imation umbrella is a logical extension of our evolution and will drive significant synergies and efficiencies across the organisation.”

A price of $7.5m for “a major disruption in the field of file sync and share” sounds cheap as chips, unless the disruption is not really that major. After selling 12,500 Transporter boxes over 32 months Connected Data is worth just $1.2m more than its initial funding.

Mark Lucas, the former CEO, was angling for effective dismissal after being voted off the board some months ago.

Imation’s board and execs are working with advisors to drive change within the Company and explore strategic alternatives to maximise shareholder value, such as divestitures of its non-core and non-operating assets.

A Strategic Alternatives Committee was formed in August 2015 to work with management and make recommendations to the Board. It’s been tasked with examining opportunities to invest the Company’s excess cash and formulating strategies to maximise the value of the Company’s investments and assets, such as its owned common stock in Sphere3D Corporation.

Imation sold its RDX business to Sphere3D in August in a $6.3m all-share deal. The shares are currently trading at $3.16 on Nasdaq.

As of September 30, 2015, Imation’s total cash balance was expected to be at least $85m. The corporate-wide restructuring plan is expected to be mainly completed by January 1, 2016, with the target completion date being in February 2016.

So DroboMan – Geoff Barrall – is now Imation’s tech saviour and tasked with building something sensible and self-sustaining from its assets combined with the Transporter technology. Connected Data gets access to Imation’s remaining resellers and Nexsan arrays will get private cloud file sync’ and share add-on functionality. That looks to be a positive move and Imation should be getting a lot of potential for its $3.1m cash and $4.4m in stock. ®