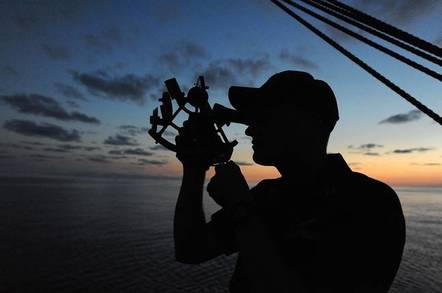 Sextants have been off the curriculum for naval officers in the US for over a decade, but now the swabbies have reinstituted celestial navigation classes over hacking fears.

The US Navy discontinued celestial navigation courses in 1998 because GPS made the old style of navigating redundant. Working out your position the old-fashioned way needs a clear sight of the horizon and the stars or sun, an accurate watch, and a serious amount of math work to get your position within a couple of miles, whereas GPS can instantly pinpoint a ship to within metres.

"We went away from celestial navigation because computers are great," Lt. Cmdr. Ryan Rogers, deputy chairman of the Naval Academy's department of seamanship and navigation told the Capital Gazette.

"The problem is there's no backup. We know there are cyber vulnerabilities. In the event that we had to go into a national emergency, we would probably have to shut the GPS down because it can be used by potential enemies."

Shutting down GPS to foil an enemy might not work anyway – Russia has its GLONASS positioning satellites partially in place, China is rapidly expanding its BeiDou system, and the European Union is working on Galileo. But there are plenty of other ways to bork or spoof a ship's GPS, both by attacking from within and from outside.

The Navy takes hacking seriously and is trying to recruit a cadre of cyber warfare engineers to protect its fleet. The Navy is also part of a billion-dollar contract with Raytheon to beef up its online defenses and spot dodgy data in situ.

But you can't hack a sextant, or the planets. Having a reliable method of navigation is essential if electrical systems go down, and that's the reason many offshore sailors carry a sextant as a backup just in case. They were even carried by commercial passenger aircraft for just such an eventuality.

The new seamen and women won't be having too tough a time of it. While they will learn how to take positions using the sextant, the actual calculations from log tables to show where the ship is will be handled by a computer, which is a blessing for anyone who's ever had to do the work by hand.

But the resumption of classes is a sign that the Navy is taking the possibilities of hacking in warfare much more seriously than it was, and that defending against information warfare is of highest priority. ®