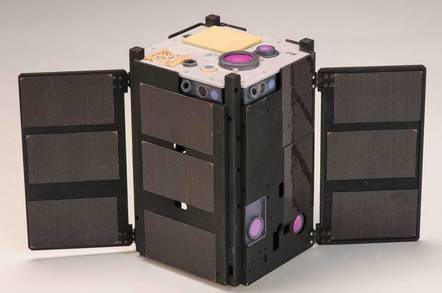 NASA's OCSD CubeSat: like a Brownie Box camera, only with LASERS

NASA is getting ready for the first test of a cubesat as a broadband-in-space platform, after receiving confirmation that last week's Optical Communications and Sensor Demonstration (OCSD) satellite is in position and operational.

Hoisted into orbit last Thursday, the OCSD CubeSat demonstrator managed by The Aerospace Corporation in California takes a different tack to other space-based laser communications platforms.

On a platform like the the LADEE probe, the laser is steerable independently of the satellite.

A CubeSat – measuring 10 cm on each side – is too small for that. As NASA's release states: “the laser is hard-mounted to the spacecraft body, and the orientation of the CubeSat controls the direction of the beam.”

This does, NASA notes, make OCSD the most compact laser system ever put into space, and even so, the agency hopes to achieve 200 Mbps, nearly one-third the 622 Mbps achieved by the much larger and more sophisticated LADEE system (it should be remembered that LADEE didn't have the inconvenience of an atmosphere – its laser was pointed at the moon).

A second mission planned for 2016 will test communications between two CubeSats, giving NASA and its partners the chance to see if they can point two satellites at each other accurately enough for communications. ®