Speaking of domestics, what's your house-bound spouse worth? 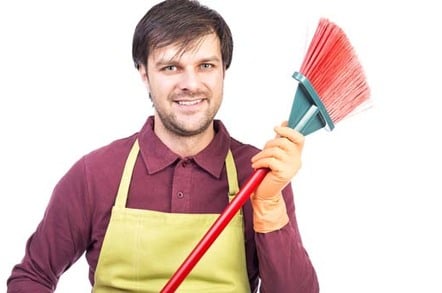 Worstall @ the Weekend Last week, when I wrote a column about the nature of cold hard cash from a rabid free marketeer point of view, commenter Chris Miller asked about the intricacies of GDP: is it actually a bad measure of how well-off we all are or is it used just because it's simple to calculate?

Basically, the answer is “yes”. With a few minor changes at least, it's going to be around and about the best measure we can come up with of something that we can calculate in anything like a useful time frame.

That said, the problems with it are myriad. The standard joke here (and as we all know, economists are known for their thigh-slappers) is that it shouldn't be GDP (gross domestic product) at all, it should be NNI (net national income). And like all jokes that have to be explained, this doesn't get any better.

A good example of that in the figures is that UK GDP is of the order of £1.7 trillion a year, the turnover of the foreign exchange markets in London is around and about £1.7 trillion per banking day. We are obviously not including the latter in the former: what we are including is the commissions that are made, the profits, out of that trading. Those commissions, of course, end up as the payments to suppliers, wages and profits of the trading houses. SO we're talking about the economic activity itself.

We also need to have some agreed-upon method of working out what that value is. At which point we use market prices: Karl Marx might have been right on a philosophical basis when he insisted that the value of a good was the labour that went into its making, but that's not actually how human beings work. We're trying to measure how much value people get to consume so we've got to use the value that people think they're consuming. That is, how much do they value it at, what will they pay for it, market prices.

So, GDP and its close analogues become the value at market prices of all production, all consumption, or all incomes. They should be exactly the same and the usual differences are explained away by measurement difficulties (the largest of which is that people lie about incomes because tax).

We know very well that this is wrong because we know that what people will pay for something is only at least what they think it is worth. They might be willing to pay much more: meaning that more value is created than is being recorded. We call that extra value consumer surplus and generally assume that it's equal to 100 per cent of GDP but we've really no good way of measuring it. Which brings us to those close analogues.

The gross part means that we are measuring before depreciation. As we all know, we can appear to be richer by not replacing something that's wearing out: great until it is entirely worn out in fact. And it's not really tax and or accounting depreciation that's the worry here. We do, sorta, take account of that reasonably well. It's the cleaning up an oil spill adds to GDP but the spill itself doesn't detract from it that is the larger problem. Cleaning pollution up should certainly be in our number. It's economic activity which adds value so it should be in our ledger of economic activity that adds value, obviously. But the original pollution was definitely a reduction in value but we don't account for that.

It's as if we were running a company by only looking at the P&L and ignoring the balance sheet. And companies that do that come to sticky ends (as Asil Nadir's Polly Peck did). What we're not doing is looking at the assets of the country (vitally, including the natural assets) and the changes in them. And we should be: and many people are struggling with how to perform these calculations right now. But the point here is that we really would like to, if only we knew how, move over to net, not gross, accounts.

It's not what you do there, it's what the people there get out of it

We're also measuring Domestic: and this should probably be National. For most places the difference isn't all that great. The amount of value that accrues to the domestic populace is pretty much the same as the amount of value that is produced within the national boundaries. There are odd places, Ireland being one, where this isn't so and so generally GNP is used to talk about that place. However, it would be better for all to use the National idea: what's the value which accrues to the people of that place rather than the value of what is being done in a place.

Finally we've got Product. And that's probably not what we really want to be measuring. Because who really cares about production directly? As Adam Smith pointed out, the point and purpose of all production is consumption. So, why don't we go measure the consumption instead? Or the incomes which allow the consumption? So, the P should really become Income.

Thus GDP should really be NNI. Which is where we get our answer “yes” from. Because the changes we need to make to our information collection mean that despite these “mistakes” we're still better off with GDP. It just takes much, much, longer to collect the bits we need to work out depreciation, how much income flows in and out over the country boundaries and so on than it does to measure what we do measure. And given that we're at least in part trying to use this number as a management tool (no, it's not the Great God of policy but a fall of 2 per cent, or rises of 5 per cent per annum should certainly get people doing some headscratching over whether current policy is quite tickety-boo) then time of computation does have its importance.

So, GDP, not very good and yet of the options the easiest to calculate. Yes.

Which is where we start to really look at what's wrong with it. Rather than the technical problems above, these are conceptual problems.

Next page: Mmmm, what's a house-bound spouse worth?
Page:
Tips and corrections
64 Comments

GDP-arrrrrrgggghhh! A no-deal Brexit: So what are you going to do with all that lovely data?

Feature What we know, plus potential ways to make that data flow

Clueless freelancers and the productivity puzzle

Cheer up, it might never happen. But it probably will