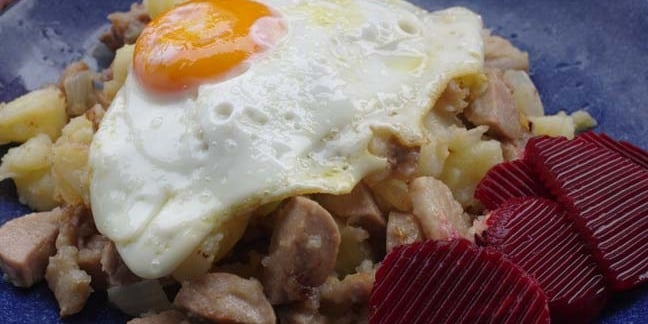 It's fair to say that Sweden is not known as a culinary world superpower.* Indeed, the locals have generally favoured being blonder than average, writing sensational pop music and designing flat-pack furniture over pushing the nosh envelope.

True, the country's meatballs are well regarded, and it is responsible for the truly terrifying surströmming, which is actually more of a weapon of mass destruction than a foodstuff.

Nonetheless, a couple of readers got in touch to suggest that the Swedes do have a dish worthy of inclusion in our growing list of post-pub wobbly dining classics.

Introducing, then, "pyttipanna" - also rendered "pytt i panna" - a potato and meat hash translating into English as "small pieces in a pan", or perhaps "bits in a pan".

Variants of this melange of leftovers can also be found in Finland, where it's known as pyttipannu, Norway (pyttipanne), and Denmark, although the locals there have chosen to dub it biksemad, or "food that has been mixed together".

In all these cases, the principal ingredients are leftover potatoes and meat. Just what meat depends on what's available - commonly pork or bacon, perhaps beef, and maybe some smoked sausage.

Pyttipanna sometimes includes such frivolities as diced carrot, but we opted for a full-on meatfest without orange stuff. Here's our roster of ingredients, gleaned from various recipes we perused... 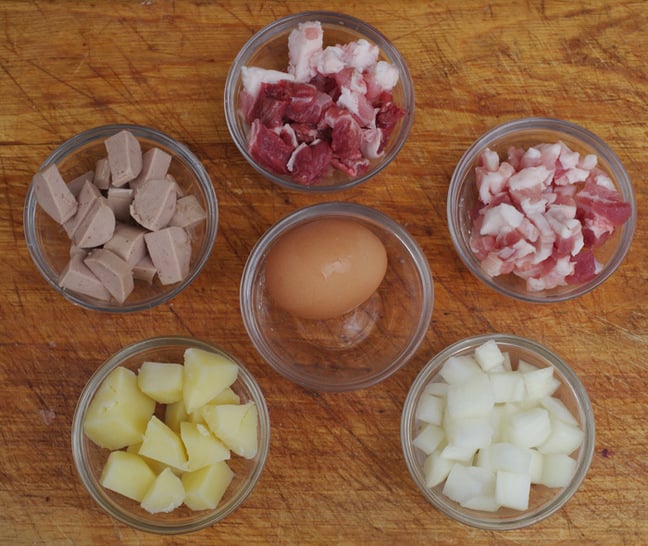 We didn't have a smoked sausage to hand, but the fridge did yield a brawurst, so that was requisitioned.

As per usual, have salt and pepper to taste on standby. Recommended extras for this dish are pickled beetroot and brown sauce, the former being a traditional accompaniment, the latter, well, just because.

Pyttipanna is not technically demanding, and if you can handle a big frying pan and a spatula, you're in business, as follows: 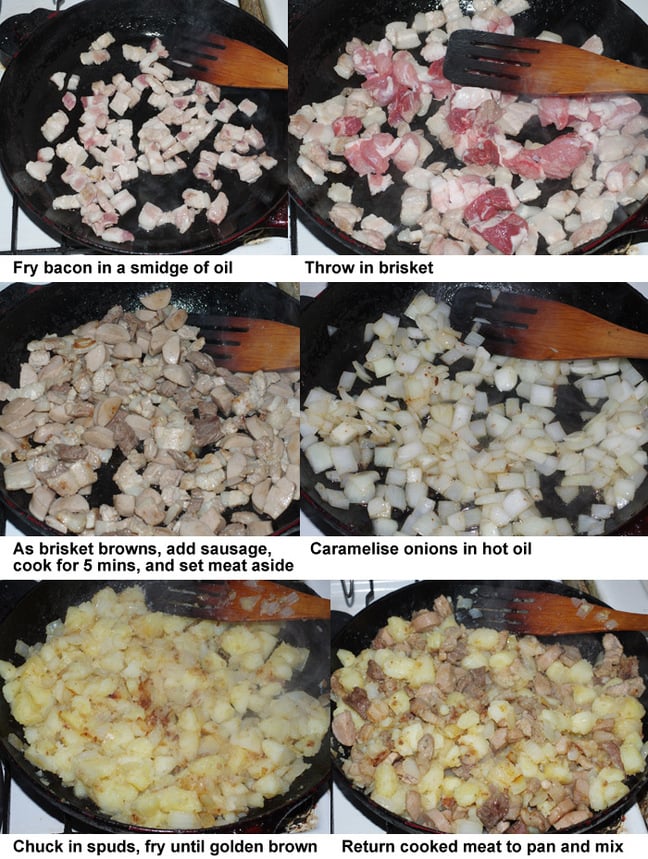 Now simply slap a fried egg on top, lovingly arrange slices of pickled beetroot to one side, and you're ready to present: 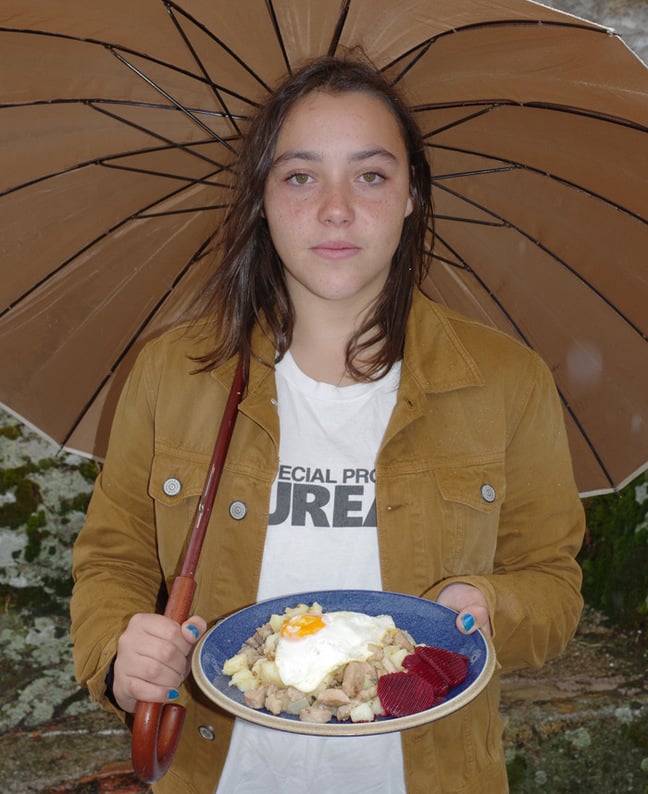 As you can see, it was chucking it down when our glamorous assistant Katarina nipped outside for the traditional plate shot, so it's just as well that pyttipanna is hearty hot nosh guaranteed to fill the belly and warm the cockles. 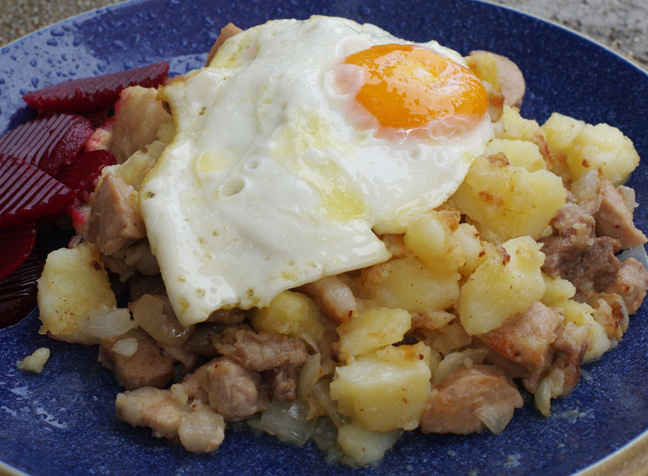 For a truly authentic touch, replace the fried egg with a yolk in the eggshell, strategically cushioned in the centre of the dish: 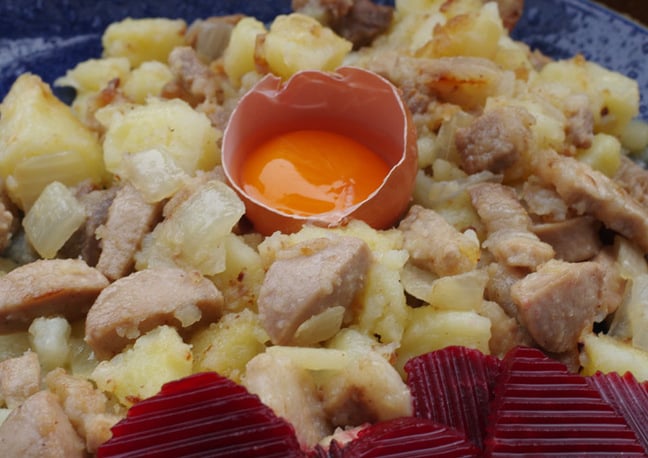 Tip the yolk into the hash, and as you mix it in the heat cooks it, creating a glorious mess entirely apt for post-pub dining.

There's no hard-and-fast recipe for pyttipanna, so get stuck in with what takes your fancy. We would say, though, that the pickled beetroot really does offer a nice bite to the hash.

We were going to end this neckfiller with a suitably apt lyric from Abba, but inexplicably the Scandinavian quartet are a bit light on culinary musings.

Instead, we offer this pearl of wisdom from IKEA supremo Ingvar Kamprad, very much in the spirit of the leftover hash concept: "Waste of resources is a mortal sin." ®

*We're not making any claims for Brit food, either, so spare us the howls of indignation.

Same old story from PwC but more optimistic than other research