NASA boffins on Pluto: We see skies of BLUE and... RED water ice 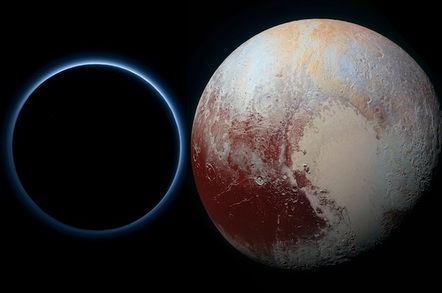 The probe detected what NASA's calling a “high altitude haze” of particles that come about as a result of “sunlight-initiated chemical reactions of nitrogen and methane.” Those reactions create “relatively small, soot-like particles that grow as they settle toward the surface.”

The particles – known as “tholins” - are probably red or gray, but they scatter blue light so that if one stood upon the surface of Pluto one would see a blue sky.

As tholins reach Pluto's surface they condense, settle as frost and eventually form the ice observed on the Kuiper Belt Object's surface. Much of that ice, NASA says, is probably red.

Silvia Protopapa, a New Horizons science team member from the University of Maryland, College Park says, helpfully, “We don’t yet understand the relationship between water ice and the reddish tholin colorants on Pluto's surface” and declares herself “surprised that this water ice is so red.”