Is this really what Meg Whitman meant by 'innovative new computing experiences'? 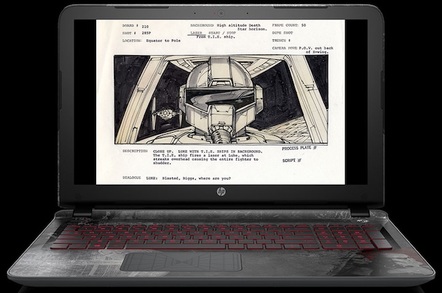 HP will soon release a special Star Wars edition laptop it says will allow you to “Unleash your inner Sith”.

And no, it's not making that claim solely based on the presence of Windows 10. The machine boasts styling based on the Lucasverse and is pre-loaded with oodles of Star Wars content including “rare wallpapers, screen savers, concept art, and original trilogy storyboards”. Plugging in a USB device apparently produces a burst of R2-D2's trademark clicks and whistles. Other actions result in the clash of lightsabers ringing out from the machine's Bang & Olufsen speakers.

“The Galactic Empire lives on in the battle-worn design of this unique special edition notebook”, HP gushes, as it extols the virtues of the “dark side inspired” machine.

There's even a font for “Aurebesh”, apparently the Lucascerse's Galactic Base Standard language, presumably for those tired of learning Klingon.

When HP announced it would split into enterprise and printer/PC entities, it promised the latter entity would deliver “new computing experiences - inventing technology that empowers people to create, interact and inspire like never before.”

Is a Sith-inspired laptop delivering on that promise? Or just a way to make a US$699 laptop with specs that won't excite serious gamers (Core i5, 12GB RAM, GeForce graphics, a DVD reader/writer) a little bit more interesting? ®