Dell bigwig 'not happy' though 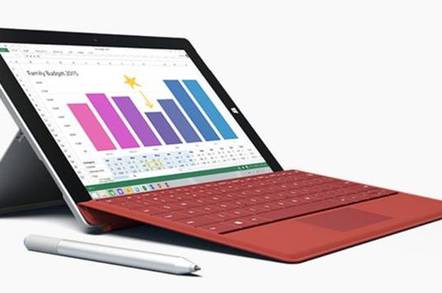 Canalys Channels Forum HP Inc’s boss welcomed Microsoft’s foray into the high-end notebook market this week, if it helped vendors push up price tags across the board.

Dell and HP announced last month that they would both resell Microsoft’s Surface tablet, an existential move given the traditional OEM relationship between the software and hardware vendors.

However, Microsoft followed that coup with the launch of its Surface Book on Tuesday, a full fat notebook being pitched as a serious Macbook killer. As such it represents a more decisive invasion of traditional hardware vendor territory by the software vendor.

Dell president of enterprise solutions Haas was being quizzed at the Canalys Channels Forum conference when he was asked about the vendor’s decision to stock the Surface Pro 3.

He explained that with a company like Microsoft relationships tend to become “multifaceted”. While there was an obvious competitive element, Dell was positioning itself as a broader solutions and services provider, and customers were coming to the company saying users wanted to use the Surface devices.

He said CIOs were saying, “We’ve got more and more of these devices that are arriving in our [company] but we want them to be managed.”

However, asked if this support would extend to selling the Surface Book, he said the firm had “no plans”, adding “we‘re not so happy about that.”

Dion Weisler, who will be heading up the HP Inc business when it spins out next month, said of Haas’s stance on Surface: “That was a good answer.”

However, he was much more sanguine on the issue of Surface Book: “As far as creating demand for $2500 devices… creating excitement in that segment is good.”

He said the industry had driven itself into the ground with successive price drops on notebooks and other client devices. Apple, of course, has maintained price points on its notebooks and appears not to have suffered.

But he cautioned that Microsoft’s latest hardware’s price tag was relevant to just one per cent of the consumer market. ®